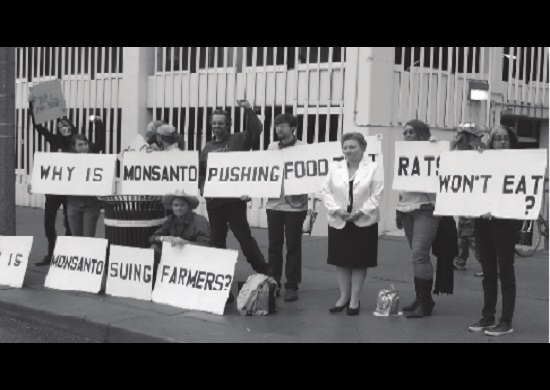 Pima County Supervisor Richard Elías is arguing that creating a state-authorized, taxpayer-subsidized “free-trade zone” to bring Monsanto Corporation to Pima County is the wrong kind of economic development for our county not only because of the relatively few people their local operation would employ but also because of their long record of environmental mismanagement and destruction.

He is also calling for people to email (cob_mail@pima.gov) or call (520-724-8126) the Board of Supervisors to let them know their concerns about “Project Corn” and, if possible, to attend the Pima County Board of Supervisors meeting next Tuesday, November 22nd, at 9 a.m., in the Board Hearing Room at 130 W. Congress Street to express their opposition.

To get a better sense of what our potential mega-corporate “neighbor” might bring our way, you can find in the PDF below an account of the actions undertaken by GMO-Free Midwest, the St. Louis portion of Occupy Monsanto, in September 2013 as they challenged the behemoth corporation in the very city that it’s headquartered in. These actions ranged from discussion panels to protests in front of Monsanto World Headquarters to “shop-ins” at branches of Whole Foods Market to demand to know which of the products they were selling contained GMOs. The PDF is of an article that originally appeared in the Winter 2013 issue of Green Social Thought.

Photo: by Don Fitz of Irina Ermakova, a leading scientist at the Russian Academy of Scientists, as she joins the GMO-Free Midwest picket.