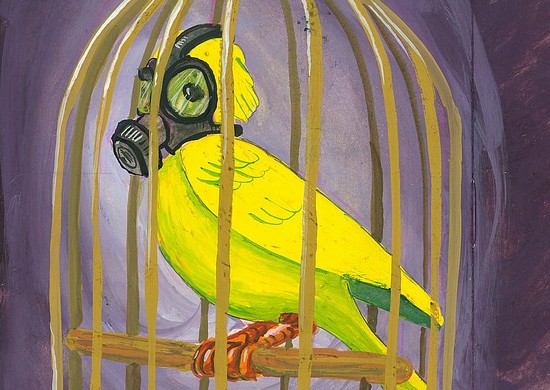 “Tucson is poised to become a world-class commercial space center,” a commentator wrote in the Arizona Daily Star in 2016. “Tucson already boasts of space-related entities such as the Planetary Science Institute, the University of Arizona’s Lunar and Planetary Lab (LPL), Optical Sciences and Astronomy Departments, and the National Optical Astronomy Observatory.”

Does it surprise anyone then that Tucson is also, according to The New York Times, scheduled to be the site of an experiment in the effects of geo-engineered particles on the stratosphere?

Could it be that Tucson was picked to be the canary in the stratosphere goal mine because scientists figure if anything goes wrong the locals would consider it normal?

Ray Bradbury’s father moved his family to Tucson when Ray was a boy. It Came from Outer Space used the name “Sand Rock” as a stand-in for Tucson. The aliens in Bradbury’s story and the also famous movie kidnap locals and then style themselves after them to enable their search in the community for supplies to fix their crashed space craft. Of course the visitors travel around town acting a bit, well, alien. They put the folks back in the community when they are done. Are we sure they all made it back? This could explain a lot about those you meet in Tucson and why experimenting here seems the natural thing to do. The stratosphere? Not that far out in Tucson.

Stephen Colbert pointed out that Mars has often been thought of “as an arid, dusty place where no one would want to live. Which is why it’s often called ‘the Tucson of space’.” If that isn’t an invite to spray the desert sky over Tucson with geo-engineered juice, what would be?

Another Tucson company is developing a high-altitude balloon capsule for space travel. For only $75K you could travel 100,000 feet above Earth. That’s in the stratosphere. Why not top off your trip with a direct experience of some geo-engineered particles?

No doubt about it. Geo-engineered dust in the Tucson stratosphere would suit this town like glitter bombs at a sorority party.

If all this is making you feel a bit queasy, here’s another piece from The New York Times that will exacerbate that sensation, titled simply “The Risks of Climate Engineering.”

Picture is by David & Angie, Creative Commons License (slightly reformatted from the original)

2 thoughts on “Tucson Stratosphere Geo-engineering Canary in a Cage!”