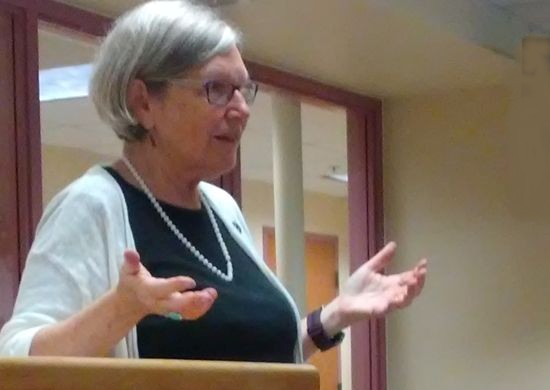 If you want to praise–or blame–the lobbyists responsible for last minute passage of the Affordable Care Act, AKA Obamacare, that would be NETWORK with Sister Simone Campbell at the helm.

Sister Simone, Executive Director of NETWORK Lobby for Catholic Social Justice and a Sister of Social Services, delivered her “Health care is patriotic” message to a crowd of about 150 packed into a small lobby at Tucson’s St. Elizabeth’s Clinic last Thursday afternoon.

With passage of the Republican healthcare bill delayed over the Fourth of July holiday due to insufficient votes, Sister Simone was one of six NETWORK lobbyists staging a “fly-out” from Washington to key Republican states to rally opposition efforts against the current U.S. Senate bill.

“We already got them to slow it down,” Sister Simone said of the Republicans who, she pointed out, held no hearings and took no outside input during closed deliberations on a health care bill she says some label “savage capitalism” and “economic terrorism . . . Do we want to go back to where people can’t get care?” she asked. “We have got to make it known: Having health care is a pro-life stance.”

The proposed plan shifts $19 billion in Medicaid costs, currently met by the federal government, to Arizona over ten years. Children make up 51% percent (636,000) of Arizona’s Medicaid population. One in two children in Arizona is currently covered by Medicaid. One half of births in the U.S. are covered by Medicaid. Cuts in Medicaid will reduce coverage and/or services for seniors, people with disabilities, and families in Arizona.

The House GOP health care bill, not much different from the one presented by the Senate GOP, would give 2.1% of Arizona’s wealthiest residents tax cuts averaging $5,670 while 2.1 million Arizonans would be at risk of losing their coverage or facing increased costs, estimated to average $4,927 annually for people enrolled in Arizona’s health insurance market.

“In my view health care is a right, and not a consumer commodity,” the Catholic nun said.

Sister Simone and NETWORK were instrumental in getting the Affordable Care Act passed at all. NETWORK has been lobbying for social justice in Washington since the early 1970s. In the very final stages leading to ACA passage in 2010, Republican senators trusted the Catholic sisters’ assurance, signed by 79 sisters, that there could be no possible political repercussions from the ACA funding abortions because there was no funding in the bill for abortions, despite that rhetoric being spread about the bill at the time.

Sister Simone describes the events around passage of the ACA in her 2014 book, A Nun on the Bus. “I was invited to the bill signing,” she told the Tucson audience. “When President Obama saw me, gave me a kiss on my cheek.” She smiled and touched the spot on her left cheek to much laughter and applause from the crowd.

Sister Simone concluded her talk by encouraging her enthusiastic audience to be active. “If you go to a Fourth of July Parade . . . ,” she started to say, then stopped and acknowledged, “Do you guys do parades? Okay, it’s too hot here. Wherever you go this holiday, take a sign: ‘Healthcare is Patriotic.’ This is not about partisanship. It’s about people. It’s serious. It’s real. And it’s our job to make a difference.”

Numbers to call to express opposition to the Republican healthcare bill:

Photograph by the author from the event last week at St. Elizabeth’s Clinic in Tucson.