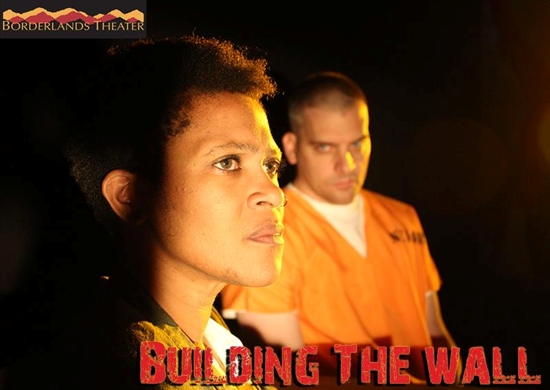 Logic is the brick and mortar of Borderlands Theater’s current production, Building the Wall.

Only two actors are on stage for the 90 minute show. Fittingly, the pressure this puts both under adds to the tension required for this drama. Gloria, played by T. Loving, is a professor allowed to interview Rick, a maximum security inmate, played by Sean William Dupont, about his past and the events that landed him, a former warden, in prison.

The story is set not far in the future. Current events and “President Trump” references run through the dialogue. The stage, a square metal mesh-top platform filling the center of the room, seats patrons on four sides. Often, it is the back of one or the other of the actors that the audience sees. This helps keep the emphasis on the words.

Both actors play their parts well. However, we don’t feel the characters are different at the end of their heavy talk from how they were at the beginning. In drama we look for connection to characters. We feel their pain, understand their weaknesses and identify with their emotions. We do not make those connections here. Neither do the characters with each other. It makes for a curious disassociation.

Here, it is the audience that goes through transformation. For any who thought “it could not happen here,” logic breaks them out of that illusion. With all the pieces fitted together we are left with a horrifying mosaic methodically constructed, but devoid of humane sense or morality. Ultimately, we are changed by the performance, what every dramatist wants.

This route makes the play somewhat preachy, but the sermon is worth hearing. It’s as if famous playwright Robert Schenkkan wants us to overhear this conversation in hopes of keeping his terrible vision from coming true, as if being prescient now is a means of prevention.

If that’s the case, we surely hope his plan works.

1 thought on “Building the Wall (a Review)”