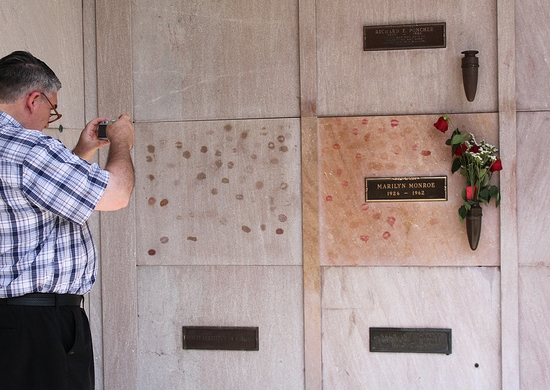 Just when you think that Marilyn Monroe finally rests in peace along comes a creepy stalker, in fact, a takes-the-cake stalker, in the rotten remains of Hugh Hefner. Seventy-five thousand bought him the crypt next to hers.

He was a man with way more money than taste. If he ever did anything good in his life, and, yes, he is credited with an assist to long-form journalism, which was generally more like window-dressing for his undressings, his tacky last act of infringement negates it all.

Marilyn endured enough tragedy in her life. Once again, like so many who imposed on her, she has no need of him, yet he invades her final resting place with his own post-mortem egotism. The story is, she made him famous and started his empire with a photo shoot that paid fifty-dollars. She even had to buy a copy of the magazine to see her photo. This is how he shows gratitude in death?

It has never been about Marilyn.

She never had contact with him in her life, which makes his final reveal all the more bizarre. Clearly, as long as she is not forgotten, he will be there to tag along as . . . what? The guy who exploited her publicly first?

I never used to get Marilyn. Now I understand. She died for our sins. Her beauty and talent were no match for the Hollywood machinery that ground her true self to bits. We all learn from Marilyn that beauty is not enough. Intelligence is not enough. Money is not enough. Sex is not enough. Fame either. None of that could keep her safe or sane.

I wish Hefner’s family would have the sensitivity to bury him someplace else. “The grave’s a fine and private place . . . “ wrote Andrew Marvell (1621-1678) in his poem, To His Coy Mistress. I wish that for Marilyn.

How unsettling our times when grave-robbing takes a modern twist and even in death Marilyn Monroe is not free of imposition or being treated like a play thing. And Hefner? He adds a new dimension to the term voyeur.