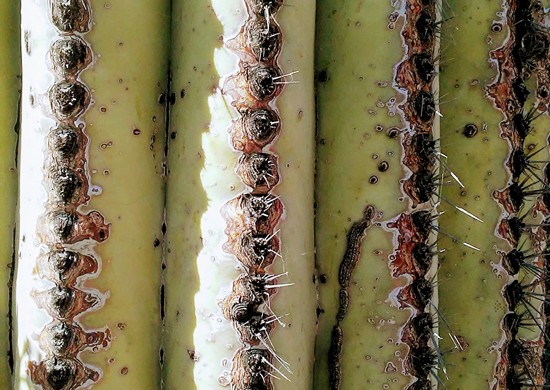 Amazon, promising a dowry of 50,000 jobs, is searching for the perfect match among 238 suitors for a second headquarters. In meeting Amazon’s October 19 proposal deadline, Tucson threw a saguaro into the ring.

In a publicity stunt questionable as a viable way of positively influencing Amazon’s decision, the important issue now is, will the cactus survive?

“The success rate of saguaro transplants is inversely related to the size of the plant. The smaller, younger plants have a much greater chance of survival,” according to Jim Elliott, owner of Arizona Cactus Sales, Inc., Chandler, Az. Over more than four decades, Elliott has relocated a fair number of saguaros.

“In fact,” he says, “it is almost impossible to kill a saguaro that is two feet or shorter. By contrast, the very large saguaros of twenty-five feet and taller rarely survive.

“These giants do not re-establish due to a combination of problems: their own weight often causes tissues to be crushed allowing rot to begin; they have to be planted so deeply that new roots do not reach the surface; and the trauma of transplantation may accelerate conditions within the plant that would have killed it eventually without the move.

“If a saguaro of reasonable size–less than 20 feet tall–is relocated, the primary factors in determining its success are how it is handled, an appropriate planting site, and the correct watering regimen,” he states.

“Remember also that a horizontal saguaro is very vulnerable to sunburn so don’t leave it exposed. Even a few minutes can cause sunburn during the hottest days of summer.”

Counter to national news reports, the saguaro was never transported to Seattle. Instead, it lay on the truck until it was relocated September 22 to the entrance at the Sonora Desert Museum.

“A healthy saguaro can weigh as much as 100 lbs. per foot. You will normally find at least three major roots that radiate from the saguaro just a few inches under the surface,” Elliott says. “Even a 20 foot specimen rarely has a taproot more than three feet deep.”

Elliott explains that those roots must be shortened to between three and four inches for transplant. “Standing a heavy plant on flimsy roots would be comparable to a human standing on their fingertips for an eternity. The tissues will inevitably be crushed which creates the perfect place for rot to begin.”

That leaves the question of watering. “Plant the saguaro dry. This does not mean just a little water—it means none. Saguaros have a very high water content that is locked up in their tissues. This allows them to survive for extended periods without adding water. The stress of transplanting occasionally causes some rotting in the root area. If the plant and soil are dry, the saguaro’s evolved defenses halt the problem and the plant lives.”

After viewing photos posted by the Desert Museum the day of the transplant, Elliott made this prediction about the Amazon saguaro: “The plant is in good shape and well within the range of OK to move. They chose wisely to have the arm so very vertical, as it is easy to support versus one that was more angled away from the stem. Any sunburn would show up immediately, so not seeing any is also a very good sign. I would have to bet that it will survive at the Sonora Desert Museum. Good for Amazon to send it to the museum where it will have a great chance.”

All of Tucson roots for the plant’s survival. When your local icon is a living giant, possibly 100 years or older, risking its demise is risky business. This caper broadcasts doubt about our community’s commitment to preservation of habitat.

All’s well that ends well. While there was no statement in Amazon’s Request for Proposals specific to gifts, Sun Corridor, Tucson’s booster business, may want to question the wisdom in trying to bribe Amazon in this manner.

Anthropomorphizing for the saguaro, odds it would have enjoyed a 1,537 mile trip to a land of 37.5 inches of annual precipitation to end up alone in a terrarium are about zero.

Photograph by the author.