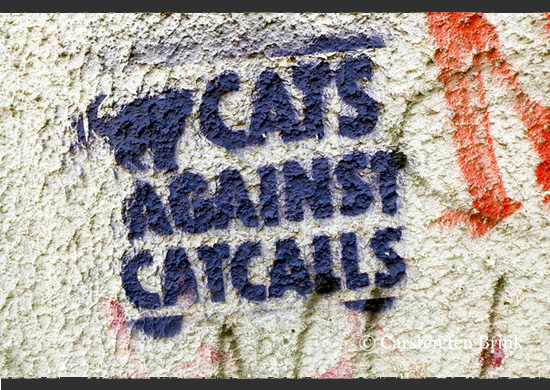 I wasn’t alone. About ten of us were sitting on the grass outside, facing a Boston street. It just happened. Nothing was planned.

We were all dorm mates at a music college summer program, a long way back. We were enjoying the sun and chatting among ourselves. A good-looking guy walked past and the group fell silent. Then one of the women wolf-whistled after him. Everything snowballed from there. All conversation stopped. As a group we became fixed on reducing young, unaccompanied male passersby to their body parts. We made kissy noises and called out, “cute butt” or, “what-a-hunk” or, “hey, baby.” There was even a, “hey, hey, what’s under the hood?” That could have been me.

Tables turned, we watched grown men curl into themselves, stuff their hands in their pockets, round their shoulders forward. They were visibly trying to make themselves into smaller targets. They avoided any eye contact and did not look back after passing us. Of the six or eight guys we heckled not one confronted us. We recognized the response.

As at the start of the incident, without any words, fun done, we spontaneously disbanded. No one talked or joked afterwards about what we had seen or said.

Reflecting later, I understood for the first time what guys gain by acting this way to random females. Objectifying anyone is definitely not done to flatter. Generally, it is only young women who get catcalled, but it’s all ages of men who do this, as ritual, with seasoned misogynists initiating the young. Catcalling is a form of repression, another public reminder your culture is one of male dominance and, regardless of who you are, any guy can target you just for being female. Catcalling is “the poor man’s” sexual harassment.

Copycat behavior was ultimately not satisfying. As it should have, making another human being feel uncomfortable gave me regrets. Victims’ experiences of the practice range from annoying to terrifying. Being verbally molested feels just like theft because someone is taking away your right to peaceful access to public spaces. Catcalling is illegal in differing degrees in the U.S. and many other countries.

That fact does not stop it. Rated from a police point of view, they are too busy for this low-level crime. That does not mean enforcing laws would not be an effective tactic. Stop Street Harassment, a movement aimed exclusively at addressing this behavior, publishes an online list of the varying laws regarding catcalling for all fifty states called Know Your Rights.

This American Life on NPR podcast of “Hollaback Girl” tells the travails of a woman who single handedly tries reason to change the behavior of serial catcallers.

We are all currently watching the exposure and fallout when powerful, famous men are caught in egregious sexual harassment to see how justice applies to them.

At the street level it appears there is no justice. We can hope that ongoing attention on sexual harassment will have a trickle down effect on catcalling. That concept hasn’t really worked in economics.

Maybe once all the rich, powerful, famous sexual perps are blamed, shamed, fired, sued, and justifiably punished there will be time to enforce the laws against a practice deemed nuisance behavior that denigrates women in America and around the world daily.

Yeah. Catcalling is just a little thing that really is a big thing.