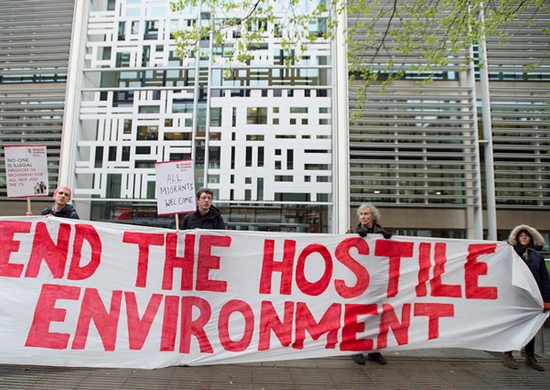 (LONDON) Every day here in Britain, a new twist in the Windrush scandal hits the news. Workers arriving in the United Kingdom between 1948 and 1973 from Caribbean countries have been labeled the “Windrush Generation,” named after the ship HMT Empire Windrush. This ship first arrived in England in June 1948, bringing workers primarily from Jamaica and Trinidad and Tobago to rebuild Britain as a result of labor shortages after World War II.

Many brought children with them. The influx ended with the passage of the 1971 Immigration Act, which said that people who were Commonwealth citizens (coming from British colonies) before that time could remain in Britain. The Migratory Observatory at Oxford University estimates there are 500,000 people residing in Britain who arrived from a Commonwealth country before 1971.

Now they are being told that they need evidence of their status in order to keep their jobs, get treatment from the National Health Service, rent property, and remain in the country. However, the Home Office failed to keep paperwork on the new residents; landing cards of Windrush Generation people were destroyed. Moreover, numbers of young people came to Britain while listed only on their parents’ passports.

Many who came to Britain as children have been told they have to leave the only country they have ever known. This is the nightmare situation that would be faced by most of the DACA recipients (Deferred Action for Childhood Arrivals — the program that gives temporary protection to some 800,000 undocumented migrants who arrived in the United States as children) if the Trump administration is successful in having that program terminated. Every day in the UK a new tragedy hits the news. People who are in the middle of cancer treatment are told that their benefits have ended; others have lost their jobs, and some have already been sent to countries they never lived in. In some ways, they are in the same situation that the DACA recipients would face over the coming years if the program is terminated; many of the Windrush cases involve adults now entering their sixties who, after having worked and paid taxes their entire life, were suddenly told with the new policy that they are not eligible for any government benefits.

But at least in the United Kingdom the government is being forced to back down. Prime Minister Teresa May and her Conservative Party (Tories) have been under the gun for immigration policies that are being held responsible for the suffering of the Windrush Generation. These policies are explicitly based on creating a “hostile environment” for immigrants in Britain.

May answered criticism by accepting that there might be flaws in the implementation of some aspects of the policies but not with the policies themselves. But this was not enough, as the victims continued to explain publicly the injustice of their cases.

The Labour Party pressured for the resignation of Amber Rudd, the Home Secretary responsible for implementing the policies. Labour Party Members of Parliament (MPs), some of whom are part of the Windrush Generation, are taking the lead in organizing rallies in the communities where many of the victims live. They are supporting a mass petition drive, which so far has obtained over 130,000 signers, calling for amnesty for the Windrush Generation and demanding a halt to all deportations.

Amber Rudd resigned the night before the large Stand Up to Racism rally on April 30 at Westminster. She had been claiming that there are no targets for the number of people to be deported. But in a letter that she wrote to the prime minister in January 2017, which was leaked to The Guardian, she said that deportations would increase by 10 percent.

Rudd has been replaced by Sajid Javid, who has pledged to make sure that members of the Windrush Generation are treated with fairness. But at this point the entire Immigration Act has come into question. People are now calling for “scrapping May’s racist act.” Diane Abbott, Labour’s Shadow Home Secretary, made clear who is ultimately responsible: “The change in Home Secretary will mean nothing unless Theresa May’s ‘hostile environment’ policy is finally brought to an end.”

Labour MP Dawn Butler told the TV news channel Sky News that Theresa May’s immigration policy is institutionalized racism. Butler, the daughter of Jamaican parents, clarified: “She is the leader, she is presiding over legislation discriminating against a whole group of people who came from the Commonwealth, who suffered racism when they came over, and now they are having to re-live that trauma again because of Theresa May. Her policies have disproportionately affected people of color.”

The Guardian newspaper played an important role in bringing to light the devastation that the Tories’ new, harsh immigration policy caused when it ran stories such as “The Children of Windrush” that highlighted the plight of the individuals involved. It would certainly be helpful to activists and DACA recipients battling the government on this issue that, if Trump succeeds in rescinding DACA (the courts are, for the time being, blocking him from doing so), a similarly powerful American media outlet will do the same. Or, failing that, that the collective power of the alternative media can bring the necessary outrage to bear and force Trump, as it did May, to back down.

Photo: Monday April 30, 2018. Protestors demonstrate outside the Home Office in London demanding an end to the Hostile Environment policy, ahead of parliamentary debate on the Windrush scandal. Photo: David Mirzoeff/Global Justice Now. Creative Commons, downloaded from Flickr. Parts of this article, written by Ann Montague, originally appeared in Socialist Action.