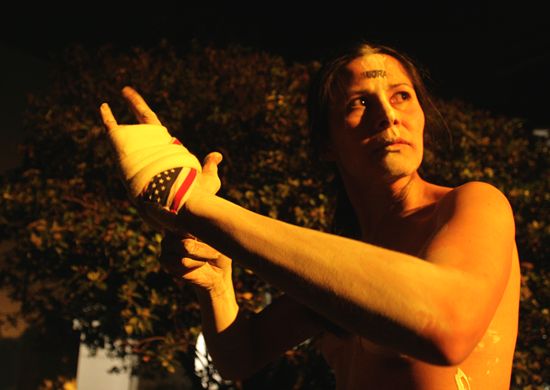 Binational Encuentro: Female Migrations “initiates a conversation among collaborating artists, scholars, and community leaders reflecting on the concepts of border, territory, migration, displacement, and movement through the lenses of gender and sexuality.” Participants from Tucson, Phoenix, Douglas and Mexico City will gather in Tucson and Douglas, Arizona, from October 11-19 for this multi-cultural event. Details are available on their website.

Violeta Luna was born in Mexico City where she earned her graduate degree in acting from the Centro Universidad de Teatro. Luna has performed and taught in Latin America, Europe, Rwanda, Japan, Canada, New Zealand, and the USA.

Luna, well-known for her controversial and audience-challenging performance art work, answers OTC’s questions about her objectives as a contributor to Tucson and Douglas’ upcoming event.

Have you been to Tucson before?

I was in Tucson in 2009, collaborating with the collective La Pocha Nostra, doing an international workshop organized by the Museum of Contemporary Art (MOCA). At the end of the workshop, we opened the process to the public, which was a very intense and pleasant experience.

What motivates your performances?

Life, difficulties in life, social inequalities, exclusion … As an artist, it is important for me to take on my creative process, not necessarily in a controversial way, but as a way of articulating a dialogue with what I am living, and it is impossible to understand what one is living without also doing an exercise of memory. As the American theater director Anne Bogart says, “if the theater (or the performance) were a verb, it would be, “I Remember’.”

Before becoming an artist I am a person and as a person, “belonging” means to assume civic responsibilities beyond being a citizen or “permanent resident.” There is no better space for me than to metaphorize and talk about these responsibilities through the art I practice. I believe that art humanizes and integrates and is a more sensitive way of reaching the viewer, the “co-citizen.” You can make art and talk about social issues by poetizing reality without falling into “the pamphlet,” the expected, by creating other spaces, where you can take risks from a certain security, and where the “other” has more to open hear and listen.

How do you describe your work?

I describe it as a dialogue between theatrical language and performance art, the latter being understood as practice, as a way of life; and I call it performative-theater, a political, multidimensional space where different elements converge (music, action, video, ritual, public spaces, poetry, etc.) for the creation of alternative narratives and realities, which are opposed to the narratives imposed from a position of power. In my work, the body is the main support of the work, the creation site, the territory where I build dramaturgies that allow me to reflect on my present. In my work I incorporate interactivity with the public to establish a dialogical relationship that allows us to find strategies before social problems.

What are your goals when taking the risks you do with your audience?

I am interested in the public being an active agent. Using the words of Augusto Boal, “Let him be a spectator-actor.” The interaction with the public is a conscious aesthetic decision in all my work. I am interested in elaborating narratives that invite reflection and action; I share with the audience so that the audience can build their own narratives. For me, performance art is a means, an inclusive space, where the audience can choose to actively participate, or not, and that is also a position.

What is the most difficult part of your art?

Every time I do art, I consider it a privilege since every day, art is not considered in government projects, and when economic reform is needed, it is the budgets of art and education that suffer the most cuts. So each day the support is less, or conditions are imposed, and as an artist, instead of having support for your projects, you are pushed to belong and perpetuate your relationship with institutions. Foundations often provide support in a conditional manner. I think the artist needs to be a self-manager of their projects. This implies risks, but it makes it more difficult for anyone to impose conditions on your work or censor your voice.

Not everyone understands what your performance is about. What would you say if they were listening?

First and most important is that your presence and participation is essential for this encuentro to take place. That the openness  to diversity is a main point of encounter and I would invite them to be border crossers.

Will you present a new show for the Tucson and Douglas Encuentro?

I will present a collage / montage of actions of Parts One and Two of the project of the Trip (tico) de la Frontera, inspired by the complex issue of migration and massive displacement of people. I made this project with Latinx artists in the group Secos & Mojados, made up of artists who, like me, are immigrants. Based in San Francisco, California, David Molina, musician composer, and Roberto Varea, director and playwright. In Parting Memories we will hear the testimony of Rosa Molina, mother of our musician and collaborator David Molina, who recorded the touching story of a mother when she tells of her decision to leave her country and emigrate to the United States.

In this work, and as an immigrant artist, it is inevitable to work on the different problems and situations that immigrants, in particular my countrymen, and now our Central American comrades, experience in the United States. We are living in an era where immigration policies have become extreme, worsening the conditions of our communities, stigmatizing the Latino body. The right-wing politicians, for electoral purposes, are taking advantage to impose the most severe anti-immigrant laws. During these times of great human movements, resulting among other things, from deep inequities among peoples, an outcome disguised as “globalization,” it is important to use the creative space to question and find alternatives. We create other narratives that help us to resize the body of the immigrant, that is, as a poetic being; this in turn opens interpretations to the possibility of multiple readings, and to viewing the immigrant not just as a working body, marginalized, exposed to abuse, to detentions and deportations, and typified as an “illegal” body.

What would you like Tucson/Douglas to know about your performance, and about this event?

It is a great pleasure for me to return to Tucson and share this work, especially at this time, when immigration policies are a constant danger to our communities.

In this Binational Encuentro: Female Migrations,  artists, activists, community leaders, will come together from different places geographically, using various artistic language and different strategies to address the social reality. You will see performances, roundtables, workshops … So the presence of all of you is important, especially because we are living such a dark moment in the history of this country, where the government so openly reveals its role to legitimize control over our bodies, with policies that deprive us of our reproductive rights, erase the abuse and sexual violence,  make women’s work precarious and exclude our voices. This is the precise moment in which we not only have to be heard but our voices need to be amplified. So I welcome you to the Binational Encuentro: Female Migrations.