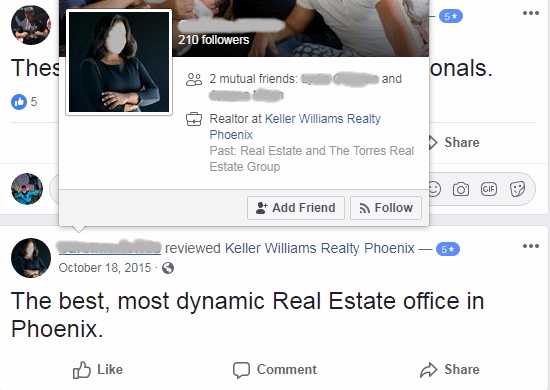 In the digital age trust is often based on reviews by people we’ve never met.  Facebook (along with many other businesses) tries to make trust easy for users by displaying a rating on reviews. However, this system is easy for businesses to take advantage of as they can have their own employees write reviews. Often companies have employees create fake or biased reviews without even attempting to hide the fact that the reviewer works for them.

I believe that I have found an example of this practice on the Facebook page of Keller Williams Realty (which has offices in Phoenix, Tucson, and elsewhere). I received multiple telemarketing calls from a realtor who I understand to work in their Phoenix office. I am on the do not call list, but Keller Williams does not appear to respect that protocol. I decided to look up their Facebook page, which shows 37 reviews with an average score of 4.5 out of 5, along with recommendations by 26 people. That sounds quite good, like the sort of business I could trust and rely on.

However, when I checked other sites these glowing reviews did not seem to find a match. The Better Business Bureau gave Keller Williams Phoenix an “F” score, which seems to result from many unanswered complaints. When I looked Keller Williams up on Yelp they had a single 1 star review. I found that a class action complaint had recently been filed in California against Keller Williams Realty, alleging violations of the Telephone Consumer Protection Act (“TCPA”) and related regulations for “negligently, knowingly, and/or willfully contacting Plaintiff on Plaintiff’s home and cellular telephones.”  In 2017, the Consumer Financial Protection Bureau (CFPB) fined Keller Williams $180,000 for a deal involving acceptance of illegal payoffs. These results fit with the image I had of the company that kept calling me.

I decided to look into the Facebook reviews to try to understand how Keller Williams had achieved this positive feedback.

As you can see for yourself if you go on the company’s Facebook page, if you hover over the names of those who left 5 star reviews, Facebook shows that the people making the posts (the “posters”) work for Keller Williams (we will not list their names here, as we can’t be sure they weren’t forced by their employer to leave positive reviews).  If those reviews were removed, the score for this business would drop to about 3.5 stars. That is not a bad score. But if you subtract the employees from the number of people recommending the business, that decreases by about 70%. A pretty big drop.

But wait: several other 5 star reviews come from employees of another real estate company — EXP real estate. And this business is directly linked to Keller Williams. A few only list real estate as their profession without giving a company name. Nearly 30 of the 37 reviewers appear to have worked in real estate recently. Also, many of those leaving a 5 star rating are friends on Facebook. Keller Williams has an agent lookup search on their website and several 5 star reviewers were listed as their employees in this search. 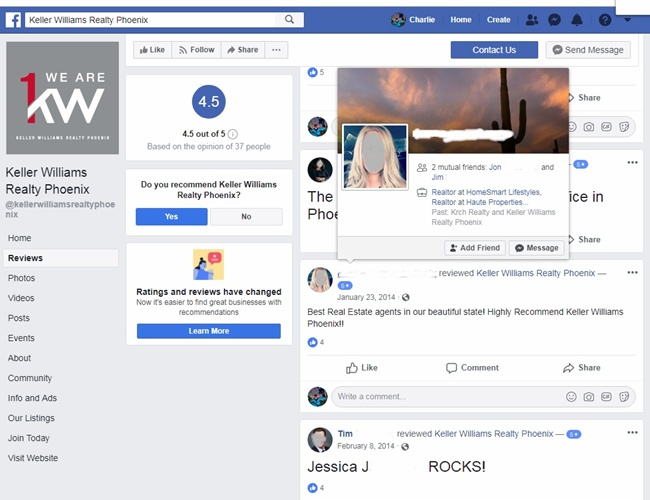 If we then remove the reviews by people who appear to have ties to Keller Williams the score for this business drops to around a 2 stars, leaving the business with zero recommendations.

Would you want to do business with a company that scored 2 out of 5 and that no one recommended?  Probably not.

Most of the reviews that remain are 1 star reviews from customers who had negative experiences with the company.

If Facebook did not allow employees to review and recommend the companies they work for, the scores you see when you look up this business would be significantly lower. Does this behavior count as misrepresentation, false advertising or fraud? Maybe. Facebook has community standards which users are supposed to follow. These standards state certain principles such as “Authenticity is the cornerstone of our community” and “Our authenticity policies are intended to create a safe environment where people can trust and hold one another accountable.”

Is Keller Williams Realty following those standards? I felt the answer was “no” and I reported this to Facebook. You can too, and if enough people do so, then maybe Facebook will take action.

Do you know other Facebook pages where the employees write many of the reviews? Send me an email at Firstfridayman@hotmail.com and maybe we can do something about it.