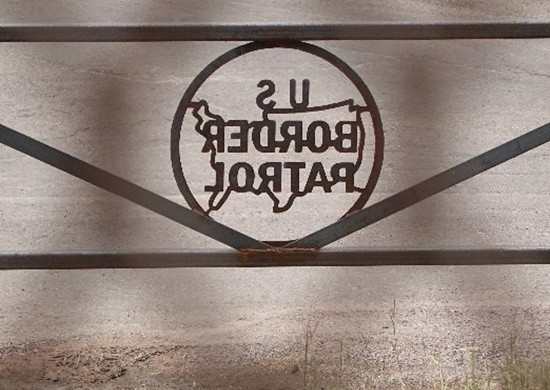 Posada (signifying Inn) is a Christmas tradition in much of the Latin world. Joseph and Mary search for shelter. Mary is about to give birth to Jesus. Shelter is refused several times and finally one house opens its door to the couple.

In the Bi-National Migrant Posada Joseph and Mary represent migrants in search of asylum.

The two Nogales’, Mexico and Arizona, held the first Migrant Posada in 2001. The Kino Initiative, headed by Jesuit priests, has hosted the event since 2008. This year’s Bi-National Migrant Posada held December 15, was the 17th year for the celebration. 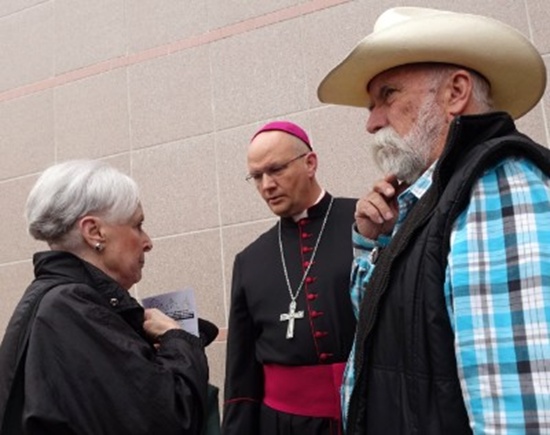 Joanne Welter originated the idea of the International Posada. Here she explains the event to an attentive Bishop Edward Weisenburger, who recently replaced Gerald Kicanas as Bishop of the Diocese of Tucson. The man in the cowboy hat is Father Pete Neely, SJ. 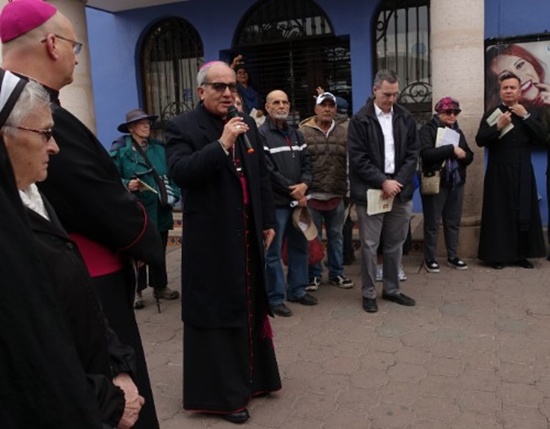 José Leopoldo González González, Bishop of Nogales Catholic Diocese, welcomes the gathered and states that he and the Tucson bishop represent the  Diocesis sin Fronteras, the Dioceses Without Borders. 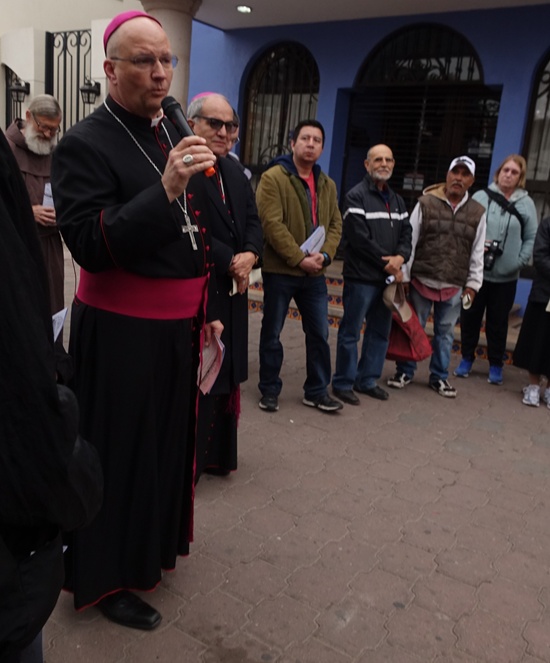 Bishop Weisenburger apologizes in Spanish for his need to address the crowd in English. He says that this is his first Posada and they should look for him at the event in the future. 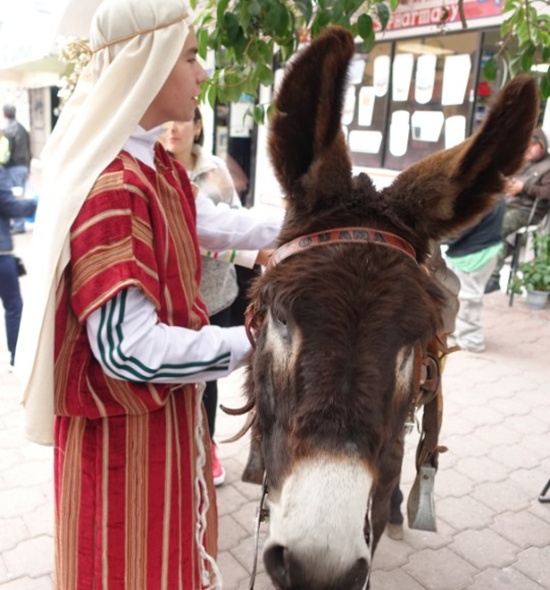 Joseph tends to the donkey. 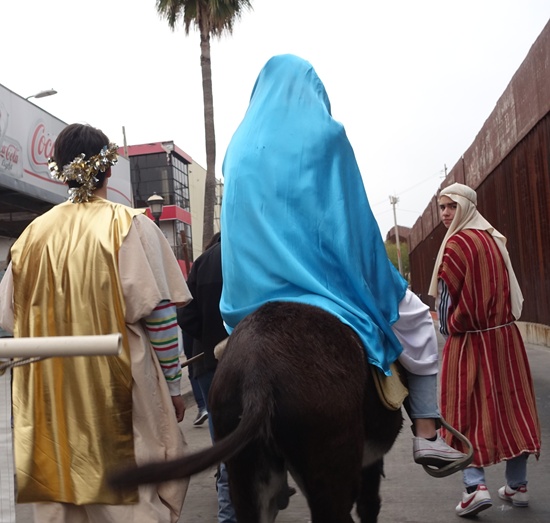 Accompanied by an angel, Mary and Joseph flee and the procession follows. 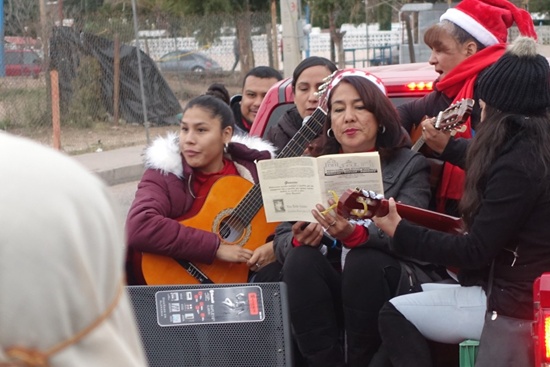 The red truck sets the pace for the crowd. Singers accompanied by guitar use a loud speaker to help guide the walkers in song the whole length of the walk from the DeConcini border crossing to the Mariposa Port. Most of the songs represent a dialogue between the MIGRANTS seeking asylum and the RESPONSE of those in a position to help them. 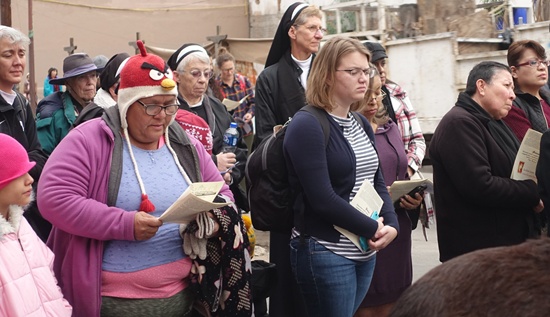 At each stop a migrant tells a story.

“I am from Guatemala. My wife and I came with our two children and my baby girl of 10 months. When I was young they killed my dad in the war of ’78. I was only five months old . . . Now, God has blessed me with a family. We decided to come to the US because there is no way to live in Guatemala (due to extortion and death threats)

MIGRANTS:
In the name of Justice
I ask for support and solidarity
Separated from children
My heart is torn apart

RESPONSE:
I don’t care about your family
Don’t come and bother me
These are your problems, Latino,
I don’t want to hear you complain

MIGRANTS:
This crime, officers,
You will dearly pay, for
The harm to these children
You will carry in your conscience.

RESPONSE:
You are all lazy and criminals
You use government benefits
I don’t want you in my country
You are the cause of many problems

MIGRANTS:
Threatened and afraid
We fled from Guatemala
Our hope for peace
Is American land

RESPONSE:
I don’t care if you die
Here you have no place
And if you arrive with violence
We are going to shoot you. 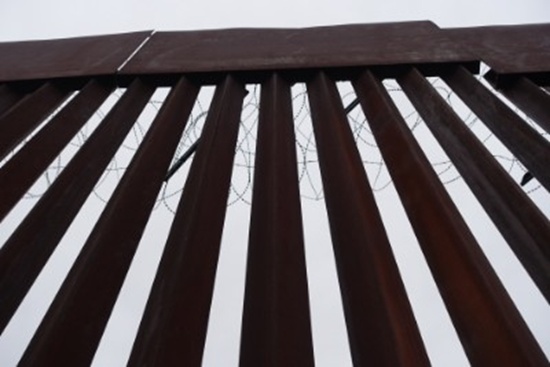 MIGRANTS:
Don’t be so cruel Donald Trump
For mercy’s sake give us asylum

RESPONSE:
I don’t care a whit about your life
I am secure and happy
I have the money I want
And have forgotten the downtrodden

MIGRANTS:
You, too, are an immigrant
who ended up in this land
Why do you act so powerful
As if believing you are God?

RESPONSE:
I am part of a great empire.
I forgot where I came from
And I don’t like Latinos.
They provoke a certain crisis in me. 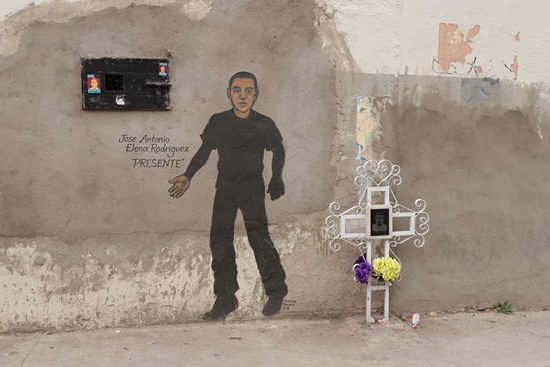 The next stop on Calle Internationale is across the street from the sidewalk where Jose Antonio Elena Rodriquez was shot and killed in 2012 by US border patrol agent Lonnie Ray Swartz who fired 16 bullets into Mexico. Swartz was recently acquitted of three charges, one of 2nd degree murder and two for manslaughter, at two trials in Tucson. 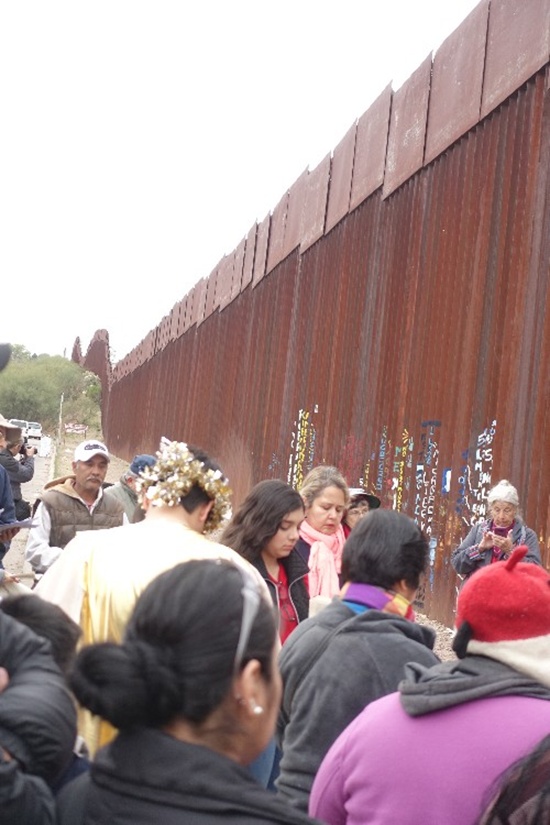 The story of a father:
I left in December 1986. I got married 20 years ago. I have 4 children. The eldest will be 19 in June, the next oldest 17 in November, the third child will be 13 in January, and the baby 11 in November. My wife is with them. We have always lived in California. I was in a legal situation for 12-15 years. I had permission to work but, unfortunately, I had bad lawyers and I was not able to fix my legal situation and ICE arrested me in August 2017. I had a court date on Monday and was deported on Friday, while holding an active visa to work. They took me out as a villain and criminal. My only crime was wanting to be in the US legally.

MIGRANTS:
Those killed by violence
Plead to God for justice
Even the rocks demand it
And denounce your greed

RESPONSE:
I reinforce my borders
With border patrols
I use technology
Seeing you…makes me laugh out loud. 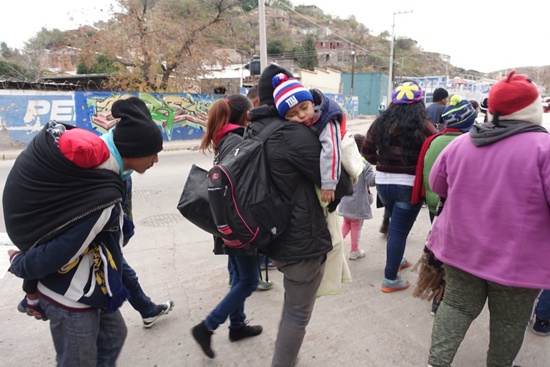 The weather is overcast and pleasant today. Walking in the procession leaves time to think of those who travel so far on foot out of fear and hope and what life must be like with so much uncertainty. 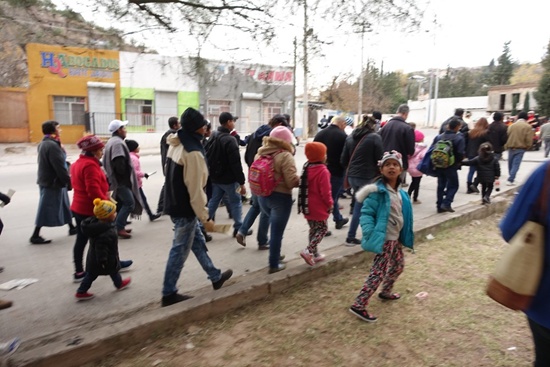 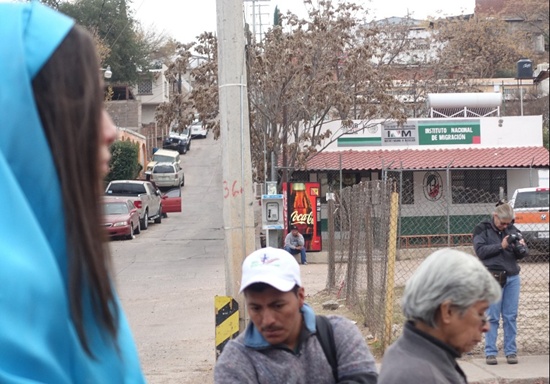 The building in the background houses the Nogales, Sonora, migration center. Many at the center join in the Posada. 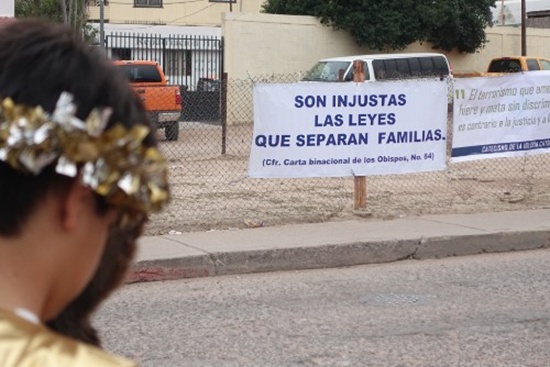 Laws that separate families are unjust. This statement is from a proclamation signed by bishops on both sides of the border. 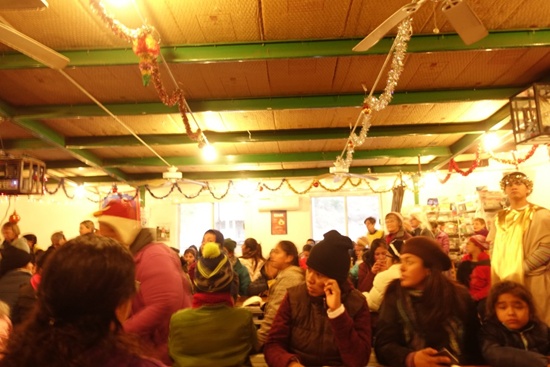 The procession ends at El Comedor, Nogales’ meals and support station for migrants. Finally, someone listens to the migrants’ pleas.

MIGRANTS:
We are one big family
that searches for a better life
We are beings with rights
and we have a lot of love

RESPONSE:
Welcome. You are brothers
We have a big heart
Don’t get depressed
Come inside our mansion

MIGRANTS:
So open that door.
Show us compassion
Because if you are Christian
Inclusion is your mission

RESPONSE:
Come in, dear brothers,
You are a great blessing.
Sit down and take refuge.
We all ask for forgiveness.