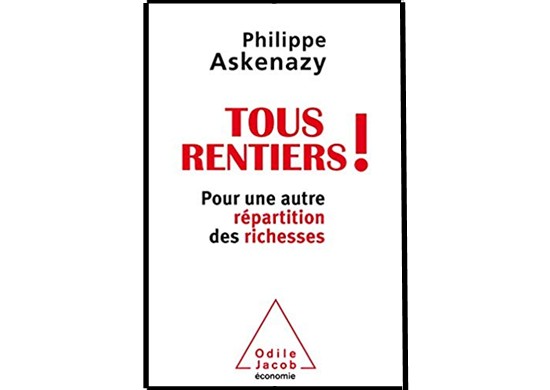 On January 15, 2015, my review of Thomas Piketty’s Capital in the Twentieth Century was posted on this site. In that review I highlighted the importance of the documentation of increased inequality among many of the countries of the world as a reflection of the gross concentration of wealth among the one percent, exemplified by the Occupy Wall Street chant “We are the 99 percent”, and similar messages from the European indigné (and indignados). I also criticized that book as a linear, mechanical approach based on statistical analysis, although the statistics were abundant and impressive, clearly making his point. Picketty called for redistribution of wealth throughout the world through progressive income taxes, a global capital tax and other fiscal policies, some of which are reflected in the messages of US Presidential candidate Elizabeth Warren, among others.

Now we have a well-conceived answer to Piketty in the French language publication of Philippe Askenazy, Tous rentiers! Pour une autre répartition des richesses. This exciting new publication was brought to my attention by John Grahl’s excellent review “Beyond Redistribution?” pages 151-157 in the September/October 2018 issue of New Left Review. Regrettably, no English language translation is yet available.

Askenazy, born in 1971, has a PhD (2003) in Economic Sciences from the University of Paris 1 and is a Senior Researcher at the National Center for Scientific Research (CNRS) and a professor at the Higher Normal School (École Normale Supérieure) in Paris. He is also a former advisor to the French Government in the early years of François Hollande’s administration (2012-2017).  He writes in a clear, straightforward, and witty style, which even I can understand; French is not one of my best languages. It is a joy to encounter an economic treatise that is highly readable and easy to comprehend. And all in 221 pages!

Professor Askenazy hails the clarity with which Piketty demonstrates the increasingly exaggerated socio-economic inequality throughout the world, but he questions the utility of the 1% vs. 99% dichotomy, which he believes blunts the message without revealing the causes of the problem, since many among the 99% aspire to become a part of the 1% and thereby sustain the system. Meanwhile, the inequality cynics continue to support policies that generate increasing inequality.

Askenazy challenges the assumption by Piketty and most mainstream economists, especially those of the social democratic persuasion, that unequal distribution of wealth is “natural.” The pressures on remuneration for labor that result from lower production costs for commodities in countries where wages are lowest are recent developments, as is the decline in basic social services resulting from lower levels of taxation. The models proposed by these economists fail to account for the global structural changes arising from such upheavals as the fall of the Berlin wall, the reconstitution of Europe, the rise of finance capital in China, and the global suppression of labor movements and uprisings by the disenfranchised in many of the world’s countries.

Those upheavals and major information technology innovations have given rise to distorted access by insider elites in the key countries to disproportionate rents, and particularly ground rent (rente foncière), as interpreted in the 18th Century by David Ricardo and developed further by Karl Marx in Capital. In his Introduction, Askenazy refers to ground rent, in the sense employed by Ricardo, as compensation of landowners for land use by the occupants of the land. That compensation differs from wages since it is unrelated to any productive activity. Marx shows how monopoly rents accrue to the owners of the best land, and by extension anything else that is owned, as opposed to produced. That in the 19th Century when the landowners were the principal beneficiaries in Europe before industrialization. For Askenazy, the concept applies to any financial return derived from advantages that favor the interests of corporations and other owners of capital and inside information that is not the product of labor.

Such rents have been monopolized by those in a position to take advantage of them with minimal state intervention, exacerbated by privatization policies in a context that Askenazy calls capitalisme affranchi, liberated or emancipated capitalism, the result of extensive, and excessive, deregulation of markets. In today’s world, the diminished role of the state has allowed for unprecedented enrichment of a few at the expense of the many. Monopoly rents are made possible by recent policies that include patents that have led to unbridled profit increases, particularly in the pharmaceuticals industry, but also in other areas in which monopoly access to markets is reinforced by public policies.  These policies and the access by a limited number of insiders to the information that allows for excessive rent income are not part of global historical conditions and values. Rents are monopolized (accaparés) consistently by capitalists, landlords, senior employees of beneficiary companies, and by states through their control or influence and power over economic, political and legal mechanisms. They take advantage of insider information that is not available to the general public in order to enrich themselves.

This pattern includes salary distortions, particularly of insiders in those industries that are taking advantage of disproportionate rents. Certain kinds of employees are favored, such as sports celebrities, film stars, (and one would add other media celebrities) considered “human capital” –a term more commonly, and confusedly, applied to acquired skills and knowledge– based on their perceived indispensability (criticité).

Askenazy insists that these conditions can be changed and demands policy reversals from governments, policy makers, and the other actors who define those policies.  He argues that public policy should value work and recover the labor theory of value advanced by Adam Smith, Ricardo and Marx. He calls for rejection of market pricing as the determination of value and a return to the labor theory of value developed in the eighteenth century by Adam Smith and David Ricardo, which became central to Marx’s analysis in the mid-nineteenth century. He argues that governments have the power to put these policy changes into effect if they have the political will to do so, by defining the conditions under which production and trade operate, including the related windfalls, in addition to fiscal and tax policies. For Askenazy, an appropriate response also includes strengthening of the labor movement, which he sees as excessively focused on the specific needs of those areas where it is strongest, rather than organization for expansion into new and more widespread areas.

Askenazy’s analysis may be excessively Eurocentric, since he leaves out social movements among marginalized and disenfranchised sectors of the populations of formerly colonized peoples of Asia, Africa, and Latin America. Such mobilization will be necessary to challenge the power and authority of elite rentiers. But can they succeed? Askenazy fails to address this question, but clearly new sparks are needed to energize the 99% beyond the modest ones provided by the Occupy movement in the United States, and the European indignés if the prairie fire is to spread.

Meanwhile, one only hopes that an English translation of this ground-breaking book will become available soon and that it will gain much wider readership.