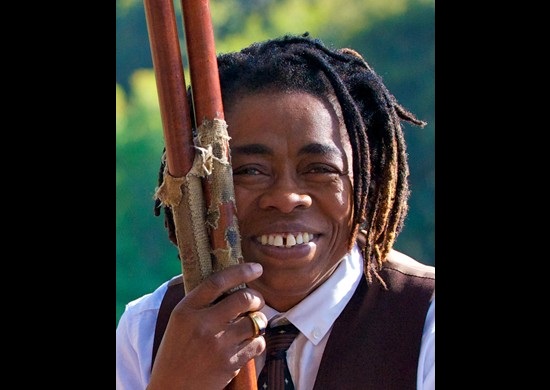 “A song can hold you up when there seems to be no ground beneath you.” — Melanie DeMore

What is a Community Sing? Foremost, it is a fine example of “participatory art,” as the artist, rather than delivering a performance focused solely on personal talent, a “look-at-me,” instead relies on the audience, a community for the duration of the event, to collaborate directly in any outcome.

DeMore, raised Catholic, spent five years in a convent. She chose not to be vowed and instead gathered up what she learned and took it into the world to make a difference. As a child she played guitar and a few other instruments, but never sang until she found her voice as an adult. She has not stopped since sharing her complementary passions for social justice and music.

She is a practitioner and teacher of Gullah stick pounding. Gullah (gull-ah) is the name of the southsea islands on the southern United States. African slaves, torn from their varied traditions and cultures in Africa, created by necessity a unique music in this region that DeMore supports through her participation and teaching.

DeMore is also a founding member of Threshold Choir, whose Tucson branch will bring her to Tucson in April to host a retreat. The Community Sing is an event offered by a hosting choir to its community. Threshold choirs offer song “on the threshold” of life events at no cost. Choir members sing where appropriate and invited, but notably at the bedsides of hospice patients.

DeMore’s appearance in Tucson additionally deserves a shout out as a welcome response to the current state of participatory art.

To quote author Greg Evans in Art Alienated: An Essay on the Decline of Participatory Art , his extensive study of the subject,

. . . a good eighty percent of the adult population in advanced industrial countries rarely or never make their own art, while only ten percent could be said to make their own art on anything even approaching a regular (i.e., monthly) basis. This is contrasted with the near universality of art participation in pre-capitalist societies.

We have strayed so far, who knew?

No need to read music to participate in this Community Sing, just a love of song.