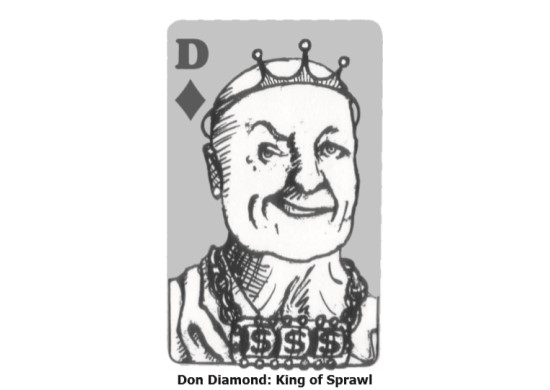 [Ed. note: First published in our pages in 2012, we are reprinting this piece in the interests of giving a more rounded assessment of Don Diamond’s legacy than that offered by the Tucson Weekly and Inside Tucson Business, who ran identical articles about him, titled respectively “Requiem for a Heavyweight” and “Mourners laud Don Diamond’s legacy, philanthropy,” in the aftermath of his recent death.]

Diamond Does the Desert

Buys a swath of heartbreakingly beautiful desert—preferably abutting an environmentally sensitive area—and spends a decade or so gaming the political system to increase its value. Then, having seduced, intimidated and/or gotten elected the right politician(s), he finagles re-zonings, road construction, delivery of energy infrastructure and aquifer rights for his parcel, located miles outside the city limits. This accomplished, he sells the parcel for an obscene profit to a corporate developer who constructs thousands of identical pink stucco houses atop said heartbreakingly beautiful desert, thereby lowering its value commercially, aesthetically and environmentally. Should, however, Diamond’s strong-arming of public officials fail and he not win water and infrastructure rights, he can always fall back on land swaps: because his beautiful parcel is adjacent to, let’s say, the Saguaro National Monument, he knows environmental activists will lobby federal and local governments for its protection. So Diamond strikes a deal with the aforementioned politicos in which he donates the parcel to a nonprofit land trust in exchange for triple the acreage in, let’s say, Maricopa County, where easy politicians will let anyone with enough money suck on their aquifer.

Good water and land use legislation. Diamond was deliciously foiled by a Tucson City Council vote earlier this year to establish a water rights boundary beyond which the city will no longer extend pipelines. This hampers sprawl big-time. The city’s new policy means an end to Diamond’s traditional business model, at least in our particular swath of heartbreakingly beautiful desert.

In a lengthy 2008 exposé, The New York Times detailed Diamond’s long and cozy relationship with Senator John McCain, as well as his dalliances with Senators Jon Kyl and even (gasp) Dennis DeConcini, in which at least two of his pending multi-million dollar deals led to federal legislation and/or pressuring of local municipalities to extend water rights, change zoning, or set up a land swap. (Right this way, folks: just follow the smell of cigar smoke into the back room at McMahon’s steakhouse.) Diamond has reportedly given more than $650,000 to federal political campaigns, but more importantly he’s a fundraising machine, chairing the finance committee for McCain’s presidential run and working those good ole boy connections to raise hundreds of thousands of dollars for later quid pro quo. The Times reports that Diamond is “candid about his expectations as a fund-raiser: ‘I want my money back, for Christ’s sake. Do you know how many cocktail parties I have to go to?’”