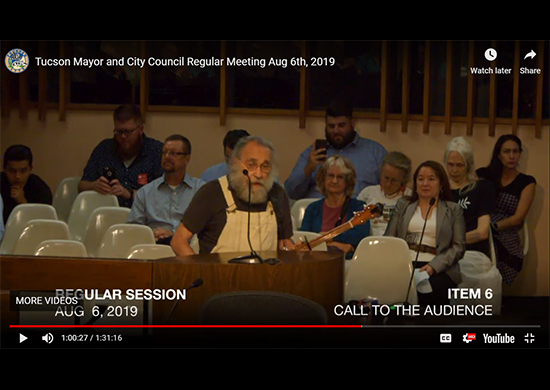 In the August 9 Arizona Daily Star, Tim Steller reported on a viral video that had garnered more than twelve million views since it was recorded at the August 6 Tucson City Council meeting and then posted on Twitter by KVOA’s Nick VinZant. It features the uproarious laughter of #GreenShirtGuy in response to the ranting comments of Jennifer Harrison, a Phoenix-based Trump supporter in a MAGA hat, denouncing mayor and council for voting to put the Sanctuary City initiative on the ballot. #GreenShirtGuy is later identified as Alex Kack of the People’s Defense Initiative, and interest in this video has generated a surge of contributions to Kack’s organization.

Earlier at the council meeting, during the Call to the Audience, Zaira Livier of People’s Defense Initiative advocated passionately for the Sanctuary City measure. She pointed to the recent El Paso shooting in which the gunman specifically targeted Mexicans and asked if, in this kind of environment, Tucson’s status as an “immigrant-welcoming community” was adequate. She also denounced the fact that some members of the council were opposed to the initiative.

VinZant, however, noted that the city has no choice but to put the measure on the ballot, so Harrison’s rant about the legality of their action was nonsensical. Earlier this year, the People’s Defense Initiative collected nearly twice the number of signatures necessary to assure that the Sanctuary City initiative would appear on the November 5 Tucson ballot, more than 12,000 of which were certified by the Pima County Recorder’s office. If the initiative passes it will add protections for undocumented people living in Tucson.

Because August 6 was the 74th anniversary of the bombing of Hiroshima, it was also an appropriate time for the City Council to adopt unanimously the “Back From the Brink” resolution which supports the UN Treaty on the Prohibition of Nuclear Weapons. The first U.S. city to do so – Baltimore, Maryland – adopted the resolution on the anniversary of the Hiroshima bombing in 2018.

During the Call to the Audience two people spoke for the resolution: Kathy Altman of Physicians for Social Responsibility and activist musician Ted Warmbrand, who came to the podium, banjo in hand, to sing a short and heartfelt song about a seven-year-old child who died in the Hiroshima bombing. A video of Warmbrand’s performance is also posted on VinZant’s Twitter feed, identifying Warmbrand as #banjoguy, but without referring to the antinuclear resolution.

The “Back From the Brink” resolution calls on the United States to lead the effort to prevent nuclear war worldwide by: 1) renouncing the option of using nuclear weapons first; 2) ending the unchecked authority of the president to launch a nuclear attack; 3) taking U.S. nuclear weapons off hair-trigger alert; 4) cancelling the plan to replace its arsenal with enhanced weapons; and 5) actively pursuing a verifiable agreement among nuclear armed states to eliminate their nuclear arsenals. The resolution is particularly significant at this time because of the recent U.S.-Russia walk-back on disarmament agreements. The Tucson resolution declares a state of emergency in the city because of the urgent threat that nuclear weapons pose.