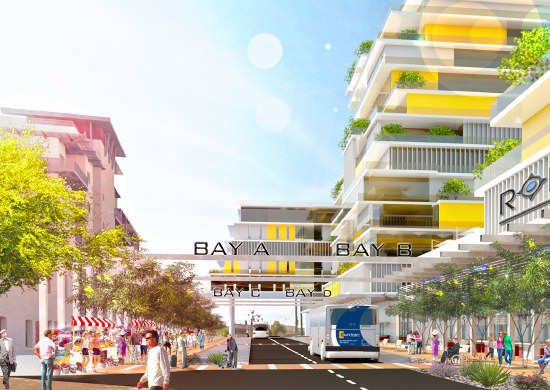 Not long ago it seemed as if the long threatened destruction of the Ronstadt Transit Center had been consigned to the dustbin of history. But this is not the case. The City Council voted on Thursday to approve a 168 page redevelopment agreement with Peach Properties, a local real estate firm that plans to raise some 200 million dollars to build a downtown complex on the site that “will include up to 1,000 apartments, retail, commercial, movie theater, parking and at least one hotel. All will rise several stories in the heart of downtown,” according to a report from KOLD.com. And, lest we forget, somewhere in the midst of this vaguely-described, almost fantastical development, there will be a rump remnant of the transit center.

Exactly who will occupy all that retail and commercial space seems a big question when, currently, the former Chicago Music Store sits empty kitty-corner from Ronstadt, as does the storefront of the former Hydra boutique across the street, and over on Congress and 5th Avenue two of the large restaurant/club storefronts sit empty and even the space recently occupied by Connect Coworking – a “shared work space” that was supposedly at the cutting edge of the gig economy – sits empty after that enterprise suddenly and without explanation closed over the summer. Indeed, one wonders if the city isn’t trying to build its way out of a stagnating market with government subsidized, speculative capital. That is to say, it is supposedly because of the need for more commercial and retail property along Congress that the Ronstadt redevelopment is moving ahead, and yet, in July, “the Rio Nuevo Board of Directors approved a $1.5 million plan to attract new businesses into approximately 10 vacant downtown storefronts along Congress Street.”

And in this, perhaps, lies some hope that this development might not happen, and that we Sun Tran riders might be allowed to go about our business in peace: that the very grandiosity of the project, against the backdrop of empty storefronts and commercial space along Congress, might keep investors from fronting this enterprise the necessary money. Another possible obstacle to the project is the Federal Transit Administration, which has the right to veto the project due to the millions of dollars they have poured into Ronstadt to better mass transit over the years, will be able to see that this project will not be an improvement for transit users. Indeed, given that the current transit center can’t handle all the bus traffic now – they are currently using the east side of 6th Avenue for several of the bus stops – it is hard to see how the tiny bit of land the redevelopment plans set aside for transit can possibly be adequate.

There may also be an opportunity for public comments as this federal approval process moves forward, so stay tuned.

Note: Pamela Powers Hannley makes an eloquent argument against this redevelopment scheme in her Blog for Arizona post “Why Can’t the Ronstadt Center Be an Open-Air Transit & Community Space?”

And for our wide-ranging coverage of this story over the years, see the following:

Ronstadt Redevelopment: An Open Letter to the Road Runner

Remembering the Community Vision for the Ronstadt Center