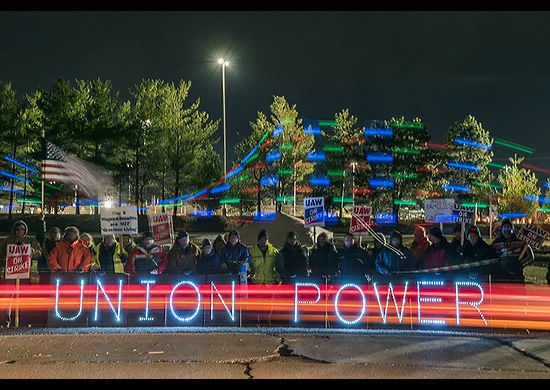 Ever since Ronald Reagan busted the air traffic controllers union (PATCO) in 1981, [1] the union movement in the United States has been in decline. Back then, one in 5 workers in the U.S. was a union member; today that number has fallen to one in 10. This decline in the unionized workforce, in turn, is a significant cause of the overall decline in U.S. workers’ wages, since union members earn more than those who are not in collective bargaining units (although the racial pay gap is so large that even union membership doesn’t fully compensate). [2]

Despite the advantages of union membership, [3] however, and the long list of benefits unions have made possible, [4] it’s common to hear strident arguments against unions, often put forth by companies who want to keep them out. [5] Some detractors claim that union leaders are corrupt, citing such incidents as the Teamsters shake up in the late 80s. At that time senior leaders were accused of having ties to organized crime and were expelled, after which the U.S. Justice Department appointed a trustee to run the union for 25 years. [6]

Since 2017 the United Autoworkers Union has been under scrutiny, and a number of its top officials have been accused of financial misdeeds. Most recently, following months of rumored impropriety – and a raid on his home by federal agents last August — union President Gary Jones resigned on November 19. He did so just before the UAW’s National Executive Board could take action against him and another top official. [7]

Jones’ resignation is a low point in a demoralizing period for UAW members – in Tucson these include members of the UAW retirees’ local and the Tucson Chapter of the National Writers Union – as allegations against their leaders include charges that they used dues money for lavish spending on liquor, cigars, and other luxuries. [8]

In addition, union leaders have been accused of taking bribes from Fiat Chrysler in return for better terms from the union in contract negotiations. Though Fiat Chrysler continues to deny wrongdoing, General Motors has recently filed suit against its rival, claiming FC has engaged in racketeering. There have already been 13 criminal charges and 11 guilty pleas among Fiat Chrysler executives and UAW leaders. [9]

These signs of corruption in the UAW are disturbing, but now is a good time for union supporters to assert that the leadership is not the union. The United Autoworkers Union, like any other, is made up of the thousands of dues-paying members who do their jobs, stand on picket lines when necessary, and vote on contracts.

When nearly 50,000 of these unionists went out on strike against General Motors, they showed that the union makes them strong and they won some significant gains. Without collective bargaining, such a show of strength would not be possible. Other recent strikes by teachers, nurses and hotel workers have also shown the strength of organized labor.

Currently, here in Tucson, miners and allied workers are on strike against ASARCO, demanding wage increases and better benefits. These workers, who haven’t had a raise in ten years, are represented by a total of five unions and are engaged in Unfair Labor Practices (ULP) action against the company. On November 18, when the five unions called a solidarity rally at the ASARCO headquarters at Williams Center, unions belonging to the Pima Area Labor Federation joined them in a show of support. As the group chanted demands for a “Fair Contract Now!” and the strike’s signature chant of “One Day Longer, One Day Stronger,” passing motorists honked and showed that the strike has support from the community, too. [10]

The corruption of leadership, as is being revealed in the UAW right now, is undoubtedly a violation of members’ trust and must be taken very seriously. But the power of the rank-and-file, and the solidarity of working people, as exemplified in many recent strikes and in that November 18 rally, should not be underestimated as a force for change, no matter what missteps union leaders might make.

[3] See “Unions Begin With You” on the AFL-CIO website at https://aflcio.org/what-unions-do

[4] See “Our Labor History Timeline” on the AFL-CIO website at https://aflcio.org/about-us/history

[5] E.g., Steven Greenhouse, “How Walmart Persuades Its Workers Not to Unionize,” June 8, 2015, The Atlantic, https://www.theatlantic.com/business/archive/2015/06/how-walmart-convinces-its-employees-not-to-unionize/395051/