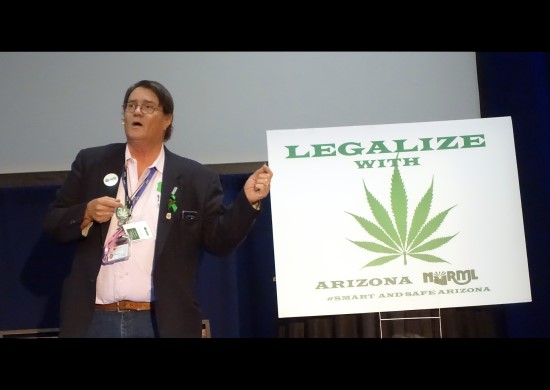 Arizona can no longer ask Mikel Weisser that question, representing a tremendous loss for the state.

Statewide Director, Arizona NORML, Weisser introduced his topic, Cannabis Legalization & Decriminalization in the State of Arizona, with humor and facts last December 8 at the Tucson Plant Medicine Conference, downtown at Tucson Community Center. The three day conference provided another opportunity for Weisser to demonstrate skills he honed as teacher and raconteur.

“In 1988 Arizona Governor Evan Mecham,” he explained, “enacted the worst drug laws in the nation.” NORML formed in Arizona two years later. In 1994 its first initiative failed. 1996 also. 1998 the same, “and onward to today,” he said. Presently, anyone caught with any amount of marijuana under two pounds could be charged with a felony, spend four months to two years incarcerated, and be fined up to $150,000.

“Cannabis concentrated the marijuana problem,” Weisser explained, “because now, apprehended medical marijuana patients with an expired or no card face loss of any public aid, public housing, college funding, and could find themselves answering ‘Ever been arrested for a felony?’ job application questions, which could possibly negatively affect employment chances.”

Weisser had quit teaching and became involved with NORML in 2010. He was on board for the 2016 Proposition 205 Campaign to Regulate Marijuana like Alcohol, failed in part by gummy bears. Prop 205 lost 51.3% to 48.7%

Weisser spent 2017 on a fourth attempt at hemp legislation.

Weisser headed up the rural campaign for 2020’s Smart and Safe Arizona Act. The campaign to date has collected 360,000 signatures and counting. He was not pleased that Arizona’s 130 dispensary licenses were controlled by three companies. He disparaged unfair policing in Arizona that results in “blacks and browns” arrested disproportionately to their numbers in the population.

He had much to say that was worthwhile. He could play the stoner, and then snap back sharp to make his point.

At the conference he recommended getting a medical marijuana card.

He closed his talk that afternoon with some advice for anyone stopped by police: After handing over your license, “Don’t answer any questions. Don’t let them search your car. Request a lawyer. And when asked, ‘Have you smoked marijuana today?’ say ‘No’.

“I am encouraging you to not get arrested.”

A bio of Mikel Weisser can be found here.