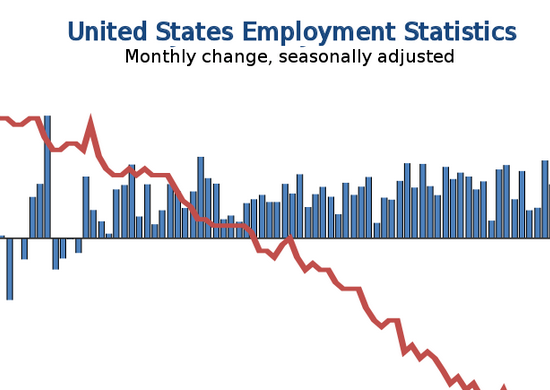 I’m in favor of that and you should be as well. In this case, what it isn’t is the unemployment rates listed by your and my devious government.

Does anyone actually believe—feel in their bones—that the current rate of those without jobs in America is a mere 6.7 percent? That’s what the bean-counters in Washington ask us to believe.

How does Uncle Sam decide who’s out of work?

Those with temporary, part-time, or full-time jobs are considered employed, as are those who perform at least 15 hours of unpaid family work. Well, Jesus that’s a relief. At least my wife is employed. Can we assume she actively sought out taking care of three kids and me, or is  that another meter?

Statistics will confess to anything if you torture them sufficiently

(U.S. Bureau again) Many people who would like to work but cannot (due to a disability, for example), or have become discouraged after looking for work without success, are not considered unemployed under this system; since they are not employed either, they are categorized as outside the labor force.

Only the United States Congress is creative enough to engineer a difference between Americans being unemployed and categorized as outside the labor force. Who needs a MAGA hat? Just give me a tin-cup and a sign—Categorized Outside the Labor Force, Please help!

So here I sit, stupid enough to wonder how unemployment data is collected? Let’s just say I have time on my hands and it’s too early to go home and face my family.

That’s easy. Official U.S. employment statistics are produced by the BLS, an agency within the Department of Labor. Every month the Census Bureau, part of the Department of Commerce, conducts the Current Population Survey using a sample of around 60,000 households, or around 110,000 individuals. The survey collects data on individuals in these households by race, ethnicity, age, veteran status, and gender, all of which—along with geography—add nuance to the employment data.

And then there’s Gene Ludwig. You gotta get to know Gene

Among other things, Gene is founder and CEO of IBM’s Promontory Financial Group. But he has a side-gig running the Ludwig Institute for Shared Economic Prosperity. Gene doesn’t believe in torturing statistics, he’s an IBM guy and says the True Rate of Unemployment, as defined by the Institute measures the percentage of the U.S. labor force that is functionally unemployed.

Hide that 6.9% under your MAGA hat. Gene says the true rate of unemployment is 22.9% for whites, 31.9% for Hispanics and 31.1% for African Americans. Across the races and divided by sex, 21.3% of American men are out of work or underemployed, but women take the prize at 30.4%. I’ve been writing for decades that I felt the rate was at least 25%, but now Gene has the numbers and no torture is involved.

Take a look at Gene’s numbers by education: No high school diploma (50.2%), high school grad (30.3%), some college (22.2%), bachelors degree (18.7%) and an advanced degree (13.1%). Times are tough right now with a pandemic and business closings across the nation, but the mind-blowing fact is that these percentages have not changed over the past 25 years. We’ve been here through good and bad times, in Republican and Democratic administrations and yet we held those horrible numbers in a time when tech advances are climbing at a vertical line.

Twenty-five years ago there was no Google, no Amazon or Facebook.

Find a quiet place and put your feet up

Think about your favorite celebrity or current leader in the billionaire race, dropping an afternoon’s earnings on a multi-million dollar home, just for the hell of it. Jeff Bezos is on his way to becoming the world’s first trillionaire, if Elon Musk doesn’t beat him to it. They’re probably nice guys, both of them. Do we need a trillionaire? We don’t even need billionaires. A thousand-million dollars? Who needs that?

My take on it is that Congress sold themselves out to the money crowd and with their head in the trough they dare not own up to how many voters are broke and out of work. What is it they say? Figures don’t lie, but liars figure.

Where are we going? Do we really want to go there?

When I was a kid, we had millionaires and they belonged to a country club, had a nice home in a good suburb and maybe a summer or winter place. Very few owned a yacht and none an airplane. I knew a lot of them because of the business I was in, but no one had bodyguards unless he was Mafia. I worked for some of them as well. Cary Grant was probably our top celebrity and national treasure, but it just wasn’t a thing to hound him for an autograph. When he walked into a room (and I was there when he walked into one), the whole place fell silent. Maybe a whisper and a nudge, but he owned the space without any fuss at all.

Of course, there was one major difference between then and now.

Most everyone had a job and a single salary sustained a family.

Jim Freeman is an American writer living in Prague, Czech Republic. His op-ed pieces have appeared in the New York Times, Chicago Tribune, International Herald Tribune, and on his blog, The Dark Side of the Moon, from which this piece was taken (with his kind permission).

Photograph is from Wikipedia (Creative Commons License) and has been altered.