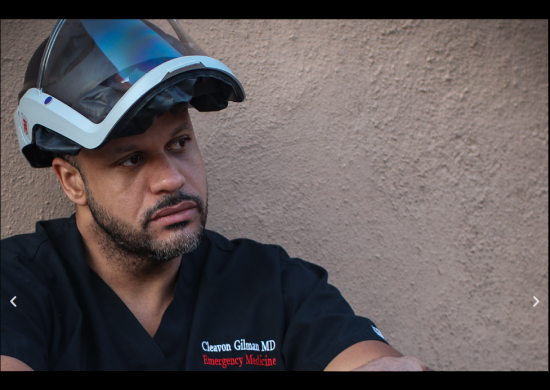 We now have our second case of an Arizona doctor sounding the alarm about the overburdened hospitals in the state, receiving much attention in the national media for it, but barely getting a mention in our own, local media. The previous case, which we reported on, involved the Tucson media’s silence at University of Arizona emergency room doctor Bradley A. Dreifuss’ June 26 New York Times op-ed, in which he stated that Arizona hospitals, in the throes of the summer COVID surge, were at the breaking point. In the more recent case, another doctor’s contention is perhaps even more worrisome as it challenges the integrity of the hospitals’ and state government’s public pronouncements regarding the COVID situation in the state. Specifically: on Nov. 22, Dr. Cleavon Gilman (pictured above), working at a hospital in Yuma, tweeted the following: “Just got to work and was notified there are no more ICU beds in the state of Arizona. What happened to the 175 beds??? We likely don’t have nursing to staff them.” The 175 beds is a reference to the number of ICU beds that were supposed to be available at the time according to the Arizona Department of Health Services.

The fact that Dr. Gilman’s contention raises doubts as to whether we can trust the state’s official numbers regarding ICU bed availability in the midst of a pandemic would seem to warrant some urgent follow-up reporting on the part of our local, professional media. This concern should only have been heightened by the fact that the hospital that Dr. Gilman was working at, the Yuma Regional Medical Center, made it known to him the following day that he should stop reporting for work. When Dr. Gilman tweeted this fact out, a huge public outcry followed (unbeknownst to readers of Tucson newspapers and viewers of three out of four of our local TV stations, KGUN 9 being the honorable exception) that compelled the hospital to hire him back.

Even a phone call of support to Gilman from President-elect Joe Biden, however, did not stir any of our local print media to cover the story, or even reprint somebody else’s (e.g., the Arizona Republic’s) story on the subject. This, combined with their lack of coverage of the Bradley Dreifuss story, would seem to suggest complicity on the part of, especially, the Star, in a desire to maintain an air of relative, if strained, normalcy in the workings of our hospitals that may be far indeed from normal.

It is certainly not the stuff good journalism is made of, nor a well-informed citizenry.

Picture of Dr. Cleavon Gilman is from his website.