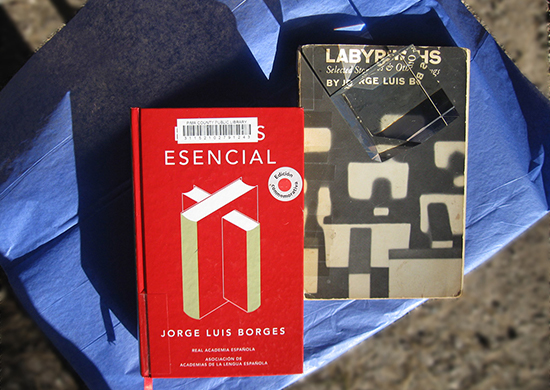 I have many fortifying memories of the Joel Valdez Library and the plaza that fronts it, which is named for the enterprising Jácome family and contains a striking red metal sculpture, but on April 5, 2021, as I sat in a black car across the street from that library and noted how its white façade glared in the morning desert sun, I could focus only on the ever-diminishing number of books it contains.

OK, so maybe that opening sentence isn’t worthy of Borges, but the other day while I was waiting in the car as Greg ran some errands, I was reading an old edition (1964) of Labyrinths, and I started to think about the main branch of Tucson’s public library as Borges might have. I had chosen him as a companion for this outing because I wanted to re-read “Funes the Memorious” (more recently translated as “Funes, His Memory”), but when I finished that fierce story about a man whose memory is so much more than photographic, I leafed backward in the book and started to read “The Library of Babel.” Borges’ possibly infinite Library that might contain all the possible books contrasted sharply with my memory of the last time I was in the library across the street from me: very few books, not just compared to what an infinite library could hold, but in relation to the space available.

On that day in early 2020, pre-Covid, I saw shelves that had been so reduced in number, height, and contents that I wondered how long it would be before there were no books in the library at all. And yesterday, with Borges nearby, it was easy for me to think that maybe there might be a tipping point, some odd metaphysical moment, after which all the books would be gone because no one wanted them or believed in them enough anymore. Borges tended toward idealism, as mystics do, so he might have thought my notion had merit.

Greg corresponded with the Pima County Public Library (PCPL) for years over their “Deselection of Library Materials Policy.” (See “My Not So Merry Correspondence with our Public Library; or, Virtue Unrewarded.” PCPL responses to his letters sometimes contained the puzzling and purposeful undermining of reality found in a passage from Borges, though without the writer’s metaphysical or metafictional intentions.) In response to Greg’s letters, library administrators said they simply wanted to offer a “popular library,” and so keeping all those old volumes was a waste of space. Inside the library there was also a bookstore that sold, among other volumes, numerous discards from the library’s collection.

Compare such a library of shrinking offerings to Borges’ Library, which is a universe in itself, “composed of an indefinite and perhaps infinite number of hexagonal galleries” and endless numbers of books. [51] Depending on which librarian you consulted there, you might also have been told that it contained all the possible books made up of all the possible combinations of the twenty-five “orthogonal symbols.” Borges’ librarians, though they were dwindling in number, still dedicated their lives to the Library, but as happens when people have conflicting notions of the way an important institution should be run, sects sprang up among them. Members of one sect “…believed that it was fundamental to eliminate useless works. They invaded the hexagons, showed credentials which were not always false, leafed through a volume with displeasure and condemned whole shelves: their hygienic, ascetic furor caused the senseless perdition of millions of books.” [56]

Luckily, these sect members weren’t able to do much harm to the Library itself because it was so enormous that even if they got rid of a particular volume there were “many thousand imperfect facsimiles: works which differ only in a letter or a comma.” And more importantly, some of the sect members had intriguing and understandable motivations, as they operated under “the delirium of trying to reach the books in the Crimson Hexagon: books whose format is smaller than usual, all-powerful, illustrated and magical.” [56]

But of course the PCPL is nothing like Borges’ possibly infinite Library, and the reasoning on which its librarians based their decision to get rid of so many books isn’t nearly as unbelievably believable. In one of the letters Greg received from the PCPL executive director, she said, “Demand for electronic resources is increasing, as is demand for physical space in our libraries, where access to job-help resources, online and in-library homework assistance, literacy tutoring, and public computers is increasing. In addition, seating for customers using wireless, in-house collections and meeting rooms is at an all-time high.” That is as may be, but it doesn’t explain why the shelves that remain continue to get smaller and the number of books on them continues to decrease.

So what is the library like after having been closed for a year because of pandemic restrictions? As it turned out, April 5 was the day customers were being allowed back inside the library again, so we went to return books and pick up a few more. The staff was cordial, the library cool and softly lit. Many, though not all, of the books we remembered seeing last year were still on the shelves, though the shelf units that remained contained fewer volumes than ever before. We walked around the first and second floors, picking up the two available titles by Stanislaw Lem. Then I looked for what they had by Borges, and the only volume on the shelves was Borges Esencial, so I checked it out, even though my ability to read Spanish is very poor. It of course contains “La Biblioteca de Babel,” which represents one small portion of Borges’ well-documented obsession with infinity. Sadly, it came from a library with an increasingly finite stock of books.