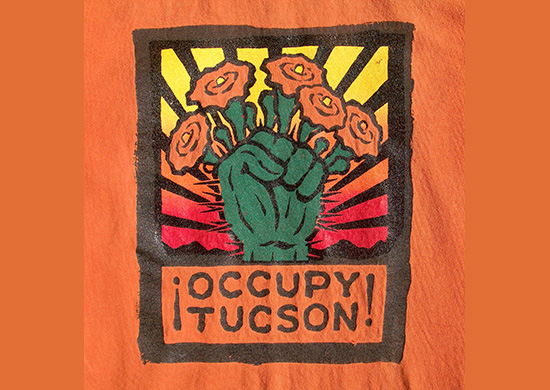 Ten years ago on October 15, 2011, the Occupy Wall Street movement arrived in Tucson. Energized people filled Armory Park and set up tents, then began to hold General Assemblies and working group meetings to organize the community that soon became Occupy Tucson. But where is it now? What is left of that once-cohesive group that sought consensus, despite conflicts, and marched for many causes, chanting “We are the 99%!”?

The tents have been gone since March of 2012, and many former Occupiers have helped fill the ranks of other groups and causes. Armory Park is still there, of course, as are the other parks that were occupied for a while – Veinte de Agosto and De Anza – but mike checks are no longer heard there. The Occupy office at the Historic Y and the office at the Global Justice Center have new tenants, and there are no plaques to commemorate the people’s business that once transpired there.

There isn’t much left online either except the Occupy Tucson Facebook page (scroll down and you’ll eventually reach some posts from those early days) and the web publication in which you’re reading this article. In fact, the Occupied Tucson Citizen, formed as an affinity group in February of 2012, is the last working group that continues to meet and do its intended job.

Of course, Occupy Tucson shares in the legacy of the Occupy Wall Street Movement, which recently celebrated its ten-year anniversary on September 17. This commemoration gave many media outlets a chance to reflect on how important Occupy Wall Street was, though some of them weren’t so enthusiastic about it at the time. (For a sampling, see Democracy Now, The Guardian, The Philadelphia Inquirer, and The Washington Post.) The Occupy Wall Street Movement is now credited with bringing back protest, with paving the way for the Bernie Sanders Campaign, for making it possible to talk about forgiving student loan debt, among other things.

On October 15, 2021, we commemorated Occupy Tucson’s ten-year Occuversary. Maybe someday we’ll want to look more carefully at how it all happened, day by day, piece by piece. And if we want to do that, we’ll need a people’s archive, a place to store the signs and buttons, publications and event flyers, and all the other tangible reminders that it really was as we remember it. That’s why we want to Occupy the Archive, and we need your help.

Do you have meaningful memorabilia from Occupy Tucson that you think should be kept for future reference? Do you have suggestions for what should be included in the digital archive? Would you like to help make sure that the archive is well ordered and well taken care of? Contact mdecamp1958@gmail.com or alicewhittenburg@gmail.com to find out how you can be a part of this undertaking. We don’t want  our still-significant items to be lost; we want to make sure that what we did together will never be forgotten.

Something from the Digital Archive: The Occupy Tucson Bulletin

As noted above, Occupy Tucson had a Facebook page, and it was an important channel for communication, as was the Occupy Tucson website. But when half a dozen of us sat down in the grass at Armory Park one cool but sunny afternoon (October 31, 2011, to be exact) to talk about how to keep people informed about things like changes in working group meetings and the latest wish list from the Kitchen, we agreed that an email newsletter would fill that need.

We knew we didn’t want to invent a creative or journalistic enterprise, but we also didn’t want it to look like the email newsletter that you get from your favorite shoe store or bookseller. A no-nonsense bulletin was what we had in mind, with a simple name like Occupy Tucson Bulletin.

We formed a working group, brought the idea to a General Assembly and got consensus to continue with the project after describing the usefulness and workability of such a bulletin. After that, the Bulletin Working Group quickly came up with a format: no images, just subdivided text under a header in which the tagline would be “Informing Tucson’s community. Supporting and strengthening Occupy Tucson.” The Bulletin would contain short informational descriptions of the issues and needs that were most important at the time.

The Bulletin wasn’t an instant success, and some people resisted it. Facebook was their preferred method of spreading the word about upcoming events. They didn’t like the idea of sending information to a centralized venue so that it could be formatted and sent out because to them posting on Facebook seemed so much more user friendly. But over time the Bulletin caught on and Occupiers began to use it.

During its early days, the Bulletin came out three times a week, which sounds like a lot until you remember that there were three General Assemblies a day back then. As time went on, the number of Bulletins grew fewer, along with the number of GA’s. Issue 80 was the last numbered issue. After that, the Bulletin appeared weekly as a listing of announcements until it faded from the scene in early 2015.

The archive will contain copies of all issues of the Bulletin, but here are a few notable examples:

Announcements for the Week of December 4-10, 2012 — Print Edition of Occupied Tucson Citizen Has Hit the Streets