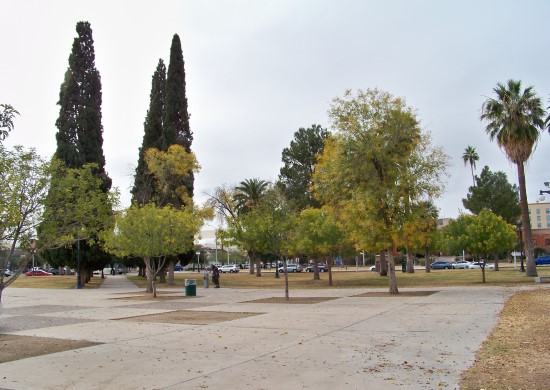 The Occupied Tucson Citizen working group, the last active portion of Occupy Tucson, recently held its first in-person meeting since pre-COVID days. More to the point, it held the meeting on the tenth anniversary (plus one day) of the founding of Occupy Tucson and on the site of Occupy’s first encampment, Armory Park in downtown Tucson.  I will spare the reader here descriptions of any wistful feelings that I had for that time, any longings to see once again that great number of people full of energy, enthusiasm and dedication to the cause of social and economic change, all motivated by a healthy outrage at the excesses of the one percent.

Instead I will make mention of the still very Occupy-appropriate feelings of being pissed off that I and the other members of our editorial collective felt as we arrived at that familiar, but largely empty, park on Saturday, October 16. When we’d agreed to meet at the park, we’d anticipated sitting at the familiar, round metal picnic tables that we’d utilized so much during the time of the first Occupy encampment (from Oct. 15 to Nov. 3, 2011) and then, in the years that followed, when we continued to have General Assemblies and other actions there.

But those familiar picnic tables were gone. And, more to the point, no picnic tables had taken their place. A normal person might ask: A city park without picnic tables? What sense does that make? But we aren’t normal people, we are veterans of Occupy, and are well familiar with the often aggressive, but at other times passive-aggressive, war that the city wages on homeless people.

And in this case we couldn’t help but suspect it to be a part of the passive aggressive side of this war. An attempt to make the life of those homeless people who try to spend the day in the park – located in the part of Tucson’s real estate market that can be most accurately described as “booming” – even more difficult by denying them the “luxury” of actually sitting at a table while they, for example, eat. The same thinking, for example, that causes cities to put benches in city parks that have multiple armrests, meaning that they can be sat on but not lain on. Or, more cruelly, to put spikes under bridges or under sidewalk awnings so that the unhoused, seeking some relief from the elements, can’t congregate there. City planners call this “defensive architecture” and their different forms are well illustrated in Brittany Hambleton’s article “10 Examples of ‘Anti-Homeless’ Hostile Architecture That You Probably Never Noticed Before.”

Not, of course, that the city ever puts it directly in terms of making life miserable for the unhoused. Usually some officialese is used to cover up the real reasons for these actions. This was reflected (though expressed more graphically than it would have been by a politician) by a policeman on a bike making his way through the park, who answered our question about the disappearance of the tables by stating that the homeless people had “abused” the tables, which then had to be removed. And then, a few minutes later, a park department maintenance worker showed up at the park and was asked the same question, to which he answered that “the riff-raff,” meaning in this case homeless people, had “damaged” the tables, which then had to be removed.

Of course, this is all nonsense. Short of having a sledgehammer and a pick-up truck, it would have been difficult to significantly damage those heavy, metal tables, chained firmly in place. And indeed the maintenance worker added that the tables were in storage (and not thrown out as they would have been if they’d actually been significantly damaged), and might eventually be brought back at some point.

I cannot however help but wonder whether the tables will be “brought back” in much the same way that the nearby Veinte de Agosto park. This park, which was the site of Occupy Tucson’s second encampment and Occupy Public Land’s important, 2015 action in support of the unhoused, was “temporarily” closed to the public back in 2015 and remains so to this day.