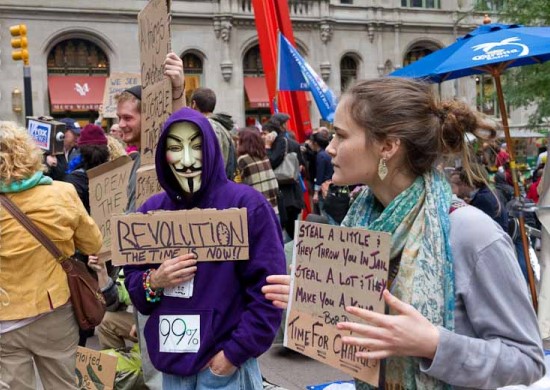 What exactly has the Occupy Wall Street movement come to symbolize from a distance of ten years from its founding? For some, it is seen as a movement that lacked concrete demands, and in which decentralization and an anti-hierarchical sensibility were more important than a coherent political program. For others, it represents a historical moment in which an almost tangible alternative world emerged onto the streets and in the parks, in which relations between people were formed spontaneously, freely, and non-violently.

On a political level it is, of course, easy to talk about the failure of Occupy Wall Street. But does anything more of it remain than the photos and videos that were circulating on social networks during the time of its anniversary in September and October? Was it merely a carnival of diversity in which people luxuriated in a sense of escape from everyday life without addressing the question of how to actually change the power structures and economic hierarchies in American society?

Today, many of Occupy’s supporters and participants ask themselves how they could have been so naive as to believe that Occupy Wall Street would lead to a complete awakening of American society. One that would then bring about far-reaching social and economic change. At the time, the noted French philosopher Alain Badiou wrote the book The Rebirth of History: Times of Riots and Uprisings, in which he describes the initial significance of the global protests in 2011, which in addition to Occupy Wall Street included the Spanish Indignados, the protests in Greece, the Arab Spring, and other movements.

Did Badiou and other left-wing theorists succumb to an infatuation in which they saw these movements as a return to history, one that would put an end to the writer Francis Fukuyama’s belief in the “end of history” and the never-ending continuation of liberal democratic capitalism?

The Columbia University scholar and critical theorist Hamid Dabashi had a debate back then with Slavoj Žižek, who had argued that these movements couldn’t, as a matter of principle, change anything and predicted that the unintended consequence of the Arab Spring would be the strengthening of Islamic fundamentalism. Similarly, it could be said, the unintended consequence of Occupy Wall Street would be the rise of conservative populism.

Dabashi objected to this, saying that Žižek did not see the new political possibilities that these movements presented, and that he translated everything into the question of how to establish a new political party that could take power.  At this same time, I wrote in the Czech periodical Deník Referendum that while Žižek was correct, he was overlooking one thing. From a long-term point of view, that is to say, these movements have what we might call an “educational significance.” This means that the movement’s activists and the public supporting it come to the gradual realization that while a spontaneous and decentralized movement evokes a vivid image of a different world, it is also lacking in something. And that something is the movement’s inability to create organizational forms that will give the movement a longer lasting form and allow it to develop policies that will lead to concrete social change.

The activists and engaged public then enter a second phase wherein they realize that it is necessary to seek real power and that a certain political organization therefore needs to be built. In the first phase, a movement like Occupy Wall Street will emerge that creates “islands of positive deviation” — that is, a place in which we can get a taste of a different kind of world.

In the second phase, a new form of organization is sought after that will allow the activists to leave the “islands” and, so to speak, travel to the mainland and change conditions there to such a degree that the “islands” will no longer be necessary. The second phase presupposes the first. Without Occupy Wall Street, there would have been no awakening of the American socialist movement. First there was Occupy Wall Street, and then there was the rise of Bernie Sanders and the Young Democratic Socialists.

The end of the financial oligarchy

Badiou discerned in Occupy Wall Street, in the Indignados, and in the Arab Spring that key moment when the first wave of global popular protest emerged against the unlimited power of the financial and imperial oligarchy and against the role of governments as the executor of oligarchic demands. These movements were blind, naive, and fragmented, lacked supporting concepts and more durable forms of organization, and in these ways were reminiscent of the first protests and uprisings of the working class in the nineteenth century.

However, it was necessary to go through all of this in order to arrive at the second phase in which the movements not only seek a suitable organizational form, but also forms an orientational idea in various parts of the world, which together with Badiou and many other contemporary philosophers can be called the “idea of ​​communism.” It is simply a hypothesis that we are able to overcome the dominance of the financial and imperial oligarchy and create a society without those gigantic class inequalities that make us unable to deal with the intertwining of various crises: political, economic, environmental, health, and psychological.

Michael Hauser studied philosophy at the Faculty of Arts at Charles University in Prague, Czech Republic. He now works at the Institute of Philosophy, a part of the Czech Academy of Sciences, and lectures at the Faculty of Education at Charles University. In 2001, he began organizing “apartment” seminars on capitalism, which resulted in the Socialist Circle (Socialistický kruh), which deals with left-wing thinking and its popularization. He is the author of several books and a number of essays.

The article was translated by Greg Evans and has been printed with the author’s permission. It originally appeared in Czech in Deník Referendum.

Photograph from Flickr.com by Diana Beato, taken at the Occupy Wall Street encampment at Zuccotti Park, New York City on October 4, 2011. Published under a Creative Commons Attribution-ShareAlike 2.0 Generic license. The image is in a slightly narrower format than the original.