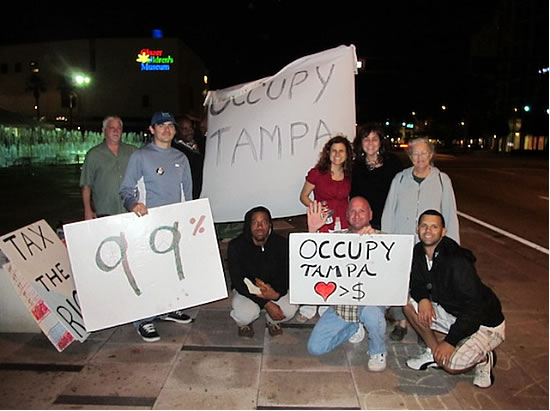 In Jan. 2012 I spent a day and night with the fine folks of Occupy Little Rock, which you can’t miss since the encampment sits right beside Interstate 30. They have a homemade geodesic dome with a wood stove, solar panel array, windmill, and meditation tent. I started driving to Texas after supper but nasty weather and high winds forced me to turn around and head back to camp. When I got there the camp had been evacuated due to a tornado alert. The friendly manager at the adjacent Holiday Inn put everyone up for free!

A couple of tornados did touch down south of Little Rock so the winds in camp were still really strong. One of the porta-johns at Occupy Little Rock tried to lift off during the storm and make it to Kansas. Fortunately Dorothy, Toto, and the Wizard weren’t on board at the time.

THE NINE LIVES OF OCCUPY TUCSON

I go through Tucson, AZ a lot so get to visit Occupy Tucson. Their persistence and endurance is truly remarkable. They have been evicted from three different encampments where the police issued occupiers over 700 citations and arrests. I enjoyed a wonderful Thanksgiving Day feast at one of their encampments. Here they are sleeping on the sidewalk after a recent eviction, but police even arrest them there. They continue protests at the big banks, against foreclosures, and several were arrested blocking a Border Patrol bus that hauls deported immigrants back to Mexico.

While visiting family in Florida I was able to hang out with the folks at Occupy Tampa. Here they are on Christmas Day, 2011 at their former home on the sidewalk in downtown Tampa. They were doing great work from there, but after months of sleeping on the sidewalk without tents and enduring dozens of arrests, the offer of a privately owned public park in West Tampa for their encampment was to good to resist. They are preparing for the Republican National Convention which will be held in Tampa in August.

THE REVOLUTION WILL HAVE CHICKEN

This wonderful video taken by Occupy Tampa media team shows members of the West Tampa community paying a visit to Occupy Tampa and leads to one of those magical moments I have often witnessed at Occupy encampments. [Watch West Tampa Community Members Feed Occupy Tampa.]