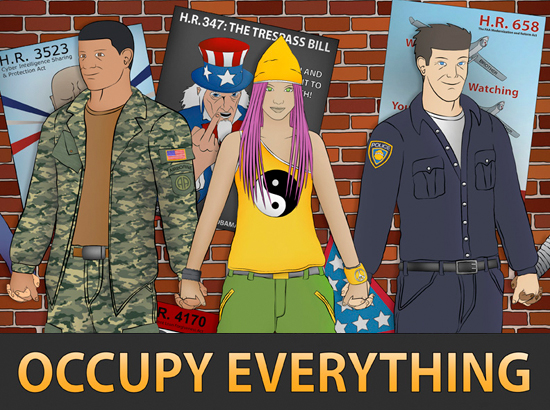 They descended on downtown parks last fall and winter, drawing hundreds of protest participants. Thousands more poured love and material support into the Occupy encampments. Drawn mostly from local organizations, Occupy Tucson organizers have been tirelessly funneling their efforts back into the groups from where they came.

Occupy Tucson was not the first activist rodeo for most of these highly motivated organizers. Although unique and part of a burgeoning global movement, much of the energy and action of Occupy Tucson has been accomplished by stitching up solidarity with existing groups which span the gamut of the progressive left. A sampling of these efforts includes:

One notable organization approached Occupy rather than the other way around. From the first General Assembly through all three Occupy Tucson encampments and most of the larger marches and protests, Veterans for Peace emerged as the core of the peacekeeping, standing between protesters and the police to ensure the safety of the protesters. They provided the confident professionalism learned from their service to our country and non-violent techniques developed over years of service protecting the activist community during protests. Several of the most active organizers at Occupy Tucson are also Veterans for Peace members.

Occupy Tucson has two web platforms (occupytucson.org, facebook), a digitally distributed weekly bulletin, two General Assemblies per week and has demonstrated a willingness to use all as a stage to give full throated support to causes and organizations near and dear to our collective heart.

1 thought on “Occupying in Solidarity”