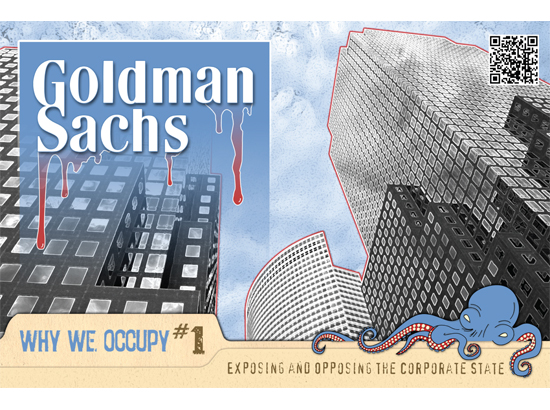 Occucards is offering a great selection of free-to-use Occupy-relevant information graphics. Check them out at occucards.com—Ed

The text as it appears on the back of the card:

Goldman Sachs Group, Inc. is a multinational investment bank founded in 1869 and headquartered at 200 West Street in Lower Manhattan. Leading up to the 2008 financial crisis, Goldman Sachs engaged in some of the worst financial fraud the world has ever seen, including packaging and selling billions of dollars in subprime housing derivatives and other worthless securities to small and mid-level investors while hiding the fact that they were simultaneously betting against these same securities. Through such fraud Goldman Sachs decimated the 401(k)s, pensions and mutual funds of thousands of Americans.
Despite blatantly violating the Securities Act of 1933, which “prohibits deceit, misrepresentation, and other fraud in the sale of securities,” and despite a 650-page Senate subcommittee investigation report accusing them of defrauding clients, not a single official of Goldman Sachs has been prosecuted. Rather, the corporation was rewarded, receiving more government bailout funds than any other investment bank. Goldman Sachs then used this taxpayer money to give its senior executives a staggering $44 billion in mega-bonuses between 2008 and 2011.
Goldman Sachs also manipulates the commodities markets. Using its enormous capital reserves, the company is able to purchase and hoard rice, wheat and other food commodities, thereby inflating global food prices and making hundreds of millions of dollars for speculators. At the same time, poor families in the U.S. struggle to meet basic nutritional needs, and starvation increases in the developing world.
All this is done in collusion with the U.S. Government. In 1999, congress, with the support of President Clinton, overturned the 1933 Glass-Steagall Act, eliminating the historic separation between commercial and investment banking, and allowing banks to gamble with the deposits of ordinary Americans. The Commodity Futures Modernization Act of 2000 similarly removed essential regulations over the speculation of commodities, which led directly to the tripling of global food prices in 2008 and the resulting food riots in over a dozen countries.
While Goldman Sachs CEO Lloyd Blankfein makes an estimated $250,000 a day, regular Americans are losing their jobs and homes at the highest rate since the 1930s. The real unemployment rate (in 2012) is almost twenty percent, far higher than the official figure of nine percent, which intentionally factors out workers who have exhausted their unemployment benefits and those working temporary or part time jobs. The so-called “jobless recovery” means that speculators like Blankfein can get richer even during a recession. As one private trader, Alessio Rastani, candidly told the BBC in the Fall of 2011, “Most traders don’t really care about fixing the economy. If you know what to do, if you have the right plan set up, you can make a lot of money from this [recession].” He continued with another dose of frank cynicism, “This is not a time right now for wishful thinking that governments are going to sort things out. Governments don’t rule the world. Goldman Sachs rules the world.”
Goldman Sachs is not the only bank that has engaged in securities fraud and manipulative, criminal speculation. These practices have become commonplace, and given the level of collusion within both major political parties, it will take a mass movement of education, protest and civil disobedience to restore essential banking regulations, force the government to prosecute corporate financial crime, and build a just and healthy economy.