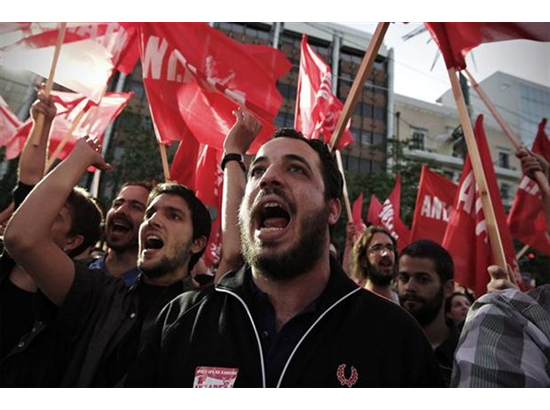 Though the front-page headline of last Monday’s Arizona Republic confidently proclaimed that “Pro-bailout conservatives win Greek election,” the reality of last week’s election was far more complicated. The election, in fact, seemed to confirm that the extreme austerity program that has been imposed on Greece by the European Union, the International Monetary Fund and the European Central Bank is turning Greek politics and political attitudes upside down. While it is true that the conservative New Democracy party won the election with 30 percent, the radical left Syriza party significantly increased its vote (from 16 percent to 27 percent) from the May 6 election, when it shocked the world by coming in second (which it did again). Even more significantly, the combined total vote of the mainstream right and left parties (New Democracy and the center-left PASOK, which got only 12.5 percent of the vote) — that is, the Greek equivalents of the Republican and Democratic parties — has nosedived from a combined 77.5 percent in the 2009 election to 42.5 percent in last week’s election (Syriza, by the way, got all of 4.5 percent of the vote in the 2009 election). Thanks to an anomaly of the Greek electoral system — that the party that comes in first gets a fifty seat bonus in parliament — New Democracy and PASOK have been able to form a pro-austerity coalition even though the primary anti-austerity parties, Syriza, Independent Greeks, Golden Dawn, Democratic Left, and the Communist Party, combined for 52% of the vote. This electoral anomaly leaves Greece, for the moment at least, at the mercy of the same two corrupt parties that got the country (with the help of Goldman Sachs’ cooking of the books) into its current financial mess.

It also highlights the reality that there can and will be major political consequences when the one percent insists on taking an ever larger share of society’s wealth for itself, whatever the cost may be to everybody else. And the fact that the anti-austerity neo-Fascist Golden Dawn party also did well, getting seven percent of the vote and therefore a place in the Greek parliament, shows that there can also be an ominous side to the revolt against austerity.