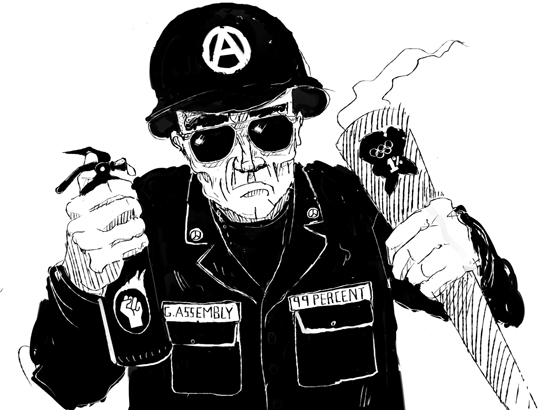 Now listen up you filthy occupiers! There ain’t no point in playing them at their own game – they’ll just out-gun us. Instead we’re gonna have to employ non-violent guerrilla tactics of subversive agitation. The enemy will attempt to disable us by capturing our leaders, so we won’t have any! They will try to find weak points in our hierarchy, so we’ll adopt horizontal organisation. And they will try to demoralise us, so we will need lulz.

It may seem unconventional, but dang it, these are unconventional times, and a wave of autonomous resistance might just take them by surprise. Either way, it’s our only hope.

We live in grave times, soldiers. Greece has already fallen to the imperialist forces, and Spain, Italy and Portugal are in the enemy’s sights. If we don’t act now, soon it could be too late. One thing we have to our advantage is numbers. We outstrip them 99 to 1, and have honour, integrity and solidarity on our side.

republished from The Occupied Times of London