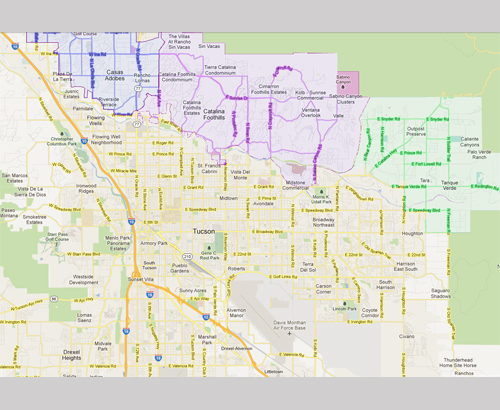 While a number of factors contribute to Tucson’s shortfall in revenue, the single, major factor is that the regions of the Catalina Foothills, Casas Adobes, and Tanque Verde have evaded annexation. This results in loss of revenue (as the approximately 300,000 residents in unincorporated Tucson are misallocated for state shared revenue), poor or disjointed planning for growth, and inequitable allocation of County funds (as Pima county provides services to unincorporated Tucson normally provided by a city). Members of unincorporated Tucson also enjoy free use of Tucson’s civil amenities. This status quo costs the City of Tucson millions of dollars in lost revenue annually.

As it stands, the richest 40% of the Valley is able to take advantage of the amenities that the city portion of the Valley provides, which are being paid for by the poorer 60%. If this pattern were to continue, the city of Tucson will be unable to lure companies to the area, which will lead to further economic decline and ultimately urban decay. And this downturn will not adhere to city limit lines on a map. Over the long term such urban decay would spill into unincorporated Tucson as well, lowering property values and increasing crime.

The structure of current law makes it difficult to change this policy, and the decision makers are incentivized not to change the law. Not only is the state legislature politically inclined towards the status quo, as Maricopa County is the largest recipient of the 60 million dollar misallocation of state general funds, the majority of the state legislature has a financial incentive to continue the current situation. Additionally, the residents of unincorporated Tucson have very little incentive to annex in and, worse yet, have every reason, thanks to lower taxes, political autonomy, and less government, to remain unannexed. The question then becomes “how can the region be coerced into incorporation, or if it cannot, how can the city extract revenue from those getting a free ride?”

Perception doesn’t always perfectly reflect fact. Political autonomy is illusory unless absence of representation is somehow better representation. The city of Tucson could push back by putting the pressure on to increase county taxes or to more equitably distribute county services (an equitable distribution of services would mean insufficient services for unincorporated Tucson).

Any effort to put real political and financial pressure on unincorporated Tucson will inspire some to run a smear campaign to try and scare Tucson voters into opposing such a measure. But if unincorporated Tucson fails to convince city voters to oppose it, an annexation might finally be perceived to be in their interest. This is a win-win for the Tucson population, in that annexation would also result in them receiving the misallocated state revenue as well as a larger tax base.

Tucson’s revenue problems are built into a political system that has evolved over the past century. There is no easy solution to a problem that exists on the systemic level. Oftentimes the solution is to throw away the old program and begin writing a new one. That is next to impossible in the world of politics, and so tough and creative alternatives must be applied. Ultimately, annexation of unincorporated Tucson would give its residents representation in a city that, for all intents and purposes, they have always been a part of. Tucson’s commercial engine would then finally be connected and fully supported (financially and politically) by its affluent neighbors and the Valley as a whole would finally be able to make development decisions as partners and not adversaries.